The Top 3 Best Wheatgrass Juicers On The Market In 2019

#1 Goes To The Omega J8006 For Best Value, Most Affordable, Good Quality

The best electric masticating juicer for wheatgrass for the money, is the Omega J8006. It’s very versatile, in that you can juice any kind of produce with it in addition to wheatgrass, and it costs half as much as competing brands like the Green Star. It’s the most affordable, highest quality juicer for beginners and novices alike. If I had to replace my juicer today, this is the model I would buy.

If that’s a little expensive for you, they have model below it that’s a little less money at under $200, but will still make an excellent wheatgrass juicer. The J8003 isn’t as nice looking in an all-white finish, but still gets the job done just as well. It has a slightly less powerful motor, but still the same single auger masticating setup… perfect for wheatgrass and other leafy greens like kale.

#2 Goes To The Green Star For Highest Yield, Best Quality, And Reliability

The Green Star models are the best in the business in my opinion. This is what I currently use, and love it except for one thing. The amount of parts it has makes it harder to clean, and it takes longer. It also costs twice as much, but I think gets slight higher yield/extraction from my produce, so over the long term it probably saves you money instead of costing you more. The build quality is second to none, and I’ve never had any trouble with mine after years and years of use. They’re very easy to get parts for however, so if any of the internals ever wear out, it’s super easy to order and replace instead of buying a whole new juicer. This is my favorite brand, but if I had to replace it I’d go with the Omega J8006 because it’s faster cleanup, and that’s the one thing that stops me from juicing everyday when I’m short on time.

The Lexen manual juicer is like a tank, and always reliable and around if you need it. I still have mine, and am very surprised by what this little juicer can do. If you’re living off grid, or in a small space, this is the perfect juicer to keep handy in your kitchen. It’s a no frills added appliance, and does the basic job of juicing wheatgrass exceptionally well. For me, wheatgrass isn’t the only thing I juice though, so I quickly grew tired of hand cranking away, and upgraded to an electric model shortly thereafter. But for someone looking to get into juicing on the cheap, this is it! You won’t be disappointed, this little juicer is pretty cool in the way it suctions itself to the kitchen counter. And yes it’s very sturdy, and super easy to clean out of all the juicers I’ve ever used!

If you just want to try juicing wheatgrass to see if you like it, and not invest a ton of money up front, the Lexen GP27 Healthy Juicer hand crank manual wheatgrass juicer is the way to go. I personally still own this juicer, and it’s what I got started with many years ago. It works well for juicing wheatgrass, is super easy to clean compared to an electric juicer, but it does take longer to juice since you have to operate the hand crank while you’re feeding the grass into it. 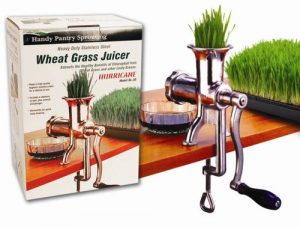 The Healthy Juicer company claims you can juicer Wheatgrass, Kale, Spinach, Collard Greens, Chard, Parsley, Lettuce – anything leafy – very easily. Personally I only used it for wheatgrass, and would recommend getting an electric if you’re looking to juice other things in addition to your wheatgrass. That said, it’s a perfect little manual juicer to get started with, and is rock solid reliable… Mine is still going strong after 10 years. Admittedly I quickly graduated to an electric, and now only use my Green Star.

The Hurricane is another quality manufacturer that makes a comparable stainless steel manual wheatgrass juicer, which is a step up with all metal internals, but at $150 dollars or so, isn’t too far off from an affordable electric juicer, which you’d like much more.

If I had to replace my juicer today, the best all-around juicer I would buy is the Omega J8006.

When it comes to electric wheatgrass juicers, there’s a lot more versatility in most masticating models. You’ve got the Green Star and Omega’s brands at the top of almost everyone’s list, and for good reason! The Green Star is what I currently use, and it’s a twin gear masticating juicer, with tons of versatility and attachments. The only downside, is it has more parts to clean which makes cleanup take a little longer. But the yield, and quality of juice it makes, is top quality. It’s almost twice the price of the Omega though at around $500 for the white model.

To me the Omegas are the best value when it comes to single auger masticating juicers. If I had to replace my juicer today, I’d buy the Omega J8006. The nice thing about the Omega lineup, is they’re all single auger masticating juicers, so there’s less parts which make them faster and easier to clean, and they’re less expensive, but have comparable performance to the Green Star twin gear. Any of these can juice wheatgrass well, with the added benefit of being able to juice a whole host of other fruits and veggies. If you’re on a budget, the Omega J8003 costs a little under $200 dollars, and the best buy/best value is the J8006 at just under $300. Either one will make an excellent wheatgrass juicer, and last you for many many years to come.

The way centrifugal juicers work, they have a centralized spinning/cutting with teeth on the cutting head. As you push you produce down in, it rapidly grinds it up slinging the pulp in the the collection bin, and allowing the juice to fall through filtering screen via gravity. The problem with this when you’re trying to juice wheatgrass, is there is no compaction to squeeze the juice from the grass blades themselves, so it simply flings all the grass into the pulp bin, and you’re left with zero juice.

You really need a masticating juicer machine for decent wheatgrass juice extraction. The augers on these progressively tighten, and in doing so gently squeeze the blades of grass tighter and tighter as the juice begins to separate from the fiber. This happens quickly in a masticating juicer, and also at a very slow RPM speed, so there’s no nutrition loss from high speed grinding and minimal enzyme loss from oxidation.

What Kind Of Juicer Is Best For Wheatgrass And Why

What is the difference between a regular juicer and a wheatgrass juicer you might be wondering? Well when most people refer to a “regular juicer” it’s typically designed to handle all different types of produce. From large cucumbers and apples, to leafy greens like kale and spinach. The trouble with most of those, is a lot of them are wide mouth or centrifugal juicers, and they’re not designed to crush and squeeze down to a very small diameter.  With wheatgrass literally being blades of grass, you kind of need some different engineering to really crush something that is already very tiny, and that’s where masticating juicers come in.

Now there are dedicated wheatgrass juicers specifically just for wheatgrass, but they’re not really practical for most home use because you can’t really put anything else through them. They’re perfect in commercial applications like in juice bars, but sort of a waste of money to buy for personal use. You’d better off getting something like the Omega J8006 masticating juicer that can juice wheatgrass, fruits and veggies, and leafy greens.

Please don’t put wheatgrass in a blender! It’s intended to be juiced, not eaten whole. Only animals can really digest large quantities of the actual grass, we are not designed to ingest that amount of grass it takes to make 2oz of wheatgrass juice. So blending is out, and can make your stomach upset (possibly vomit) if you drink a lot of it. The wheatgrass will become a thick paste, almost like a shake with no water added. You really need to separate the juice from the fibers in this case, and a blender will not do that in any capacity.

You’d be better off to try this wheatgrass powder you can add to your smoothies if you want to use a blender.

Wheatgrass Without A Juicer

Like we talked about above, if you don’t want to buy a juicer, or are looking for ways you can get the healing benefits of wheatgrass without having to grow it and juice it, your best bet is to try this wheatgrass powder. You can add it to your smoothies, or simply mix it with water and drink it like a protein shake.

Most of the commercial wheatgrass juicers are going to be all stainless steel, in either hand crank or electric models, and specifically designed for counter top use for juice bars. They normally come with larger motors for the much needed horsepower of running all day every day, but also have a hefty price tag that comes along with it at around $600 – $1200 dollars.

For home use, these are overkill, not to mention the limited amount of produce you can put through them. They’re not designed to be an all around juicer that can take carrots, cucumbers, and other large types of produce. You’d have to cut them up so small in order to feed them through the chute, it wouldn’t be worth your time. But this is intentional, as they are exceptional at extracting juice from wheatgrass, and have the highest yield of any other juicer on the market.

Best Juicer For Wheatgrass (most versatile for the money)

The best all-around juicer that you can use for all types of product, but you can still juice wheatgrass with it, is the Omega J8006 masticating juicer. It’s a slow auger juicer, that’s easy to clean since it only has one auger head opposed to the twin gear models like a Green Star, and has over 4,000 4.5 stars on Amazon, and is the best buy for the money compared to many other models that cost twice as much. In my opinion, this is the best all-around juicer, and this is the model I would buy if I had to replace my juicer today.

If you’d like to see more reviews on these wheatgrass juicers, check out these 3,500 + reviews for the Omega juicers, and 4,000 + reviews on the Green Star. The manual juicers also have good reviews, at 500+ 4.5 stars out of 5 for the Lexen, and 50 + for the stainless steel commercial grade Miracle Exclusives.

Where To Buy Your Wheatgrass Juicer On Sale & With Free Shipping

I buy almost everything on Amazon these days, and with free shipping and fast delivery, you can’t go wrong. I’ve found the cheapest price on most of these juicers to be the prime items, and they’re regularly on sale which matches or beats the clearance prices you’d find at retails stores like Walmart, Target, and Bed Bath And Beyond. If you check these listings on Amazon and scroll to the bottom, you can also see most all of these juicers are easy to get parts for from the same sellers. The Omega, Green Star, and Lexen are cheap to replace the auger seals in, but most last for years and years before needing any maintenance.