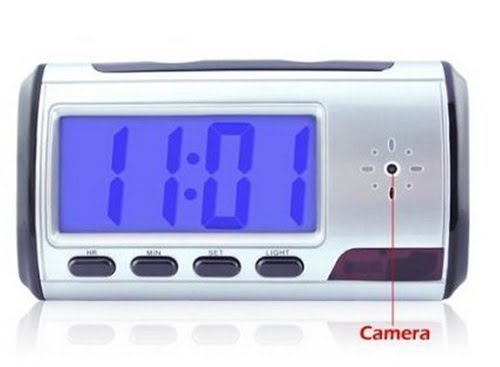 A Look At 5 Of The Best Hidden Cameras From Amazon: Stealth at its Best!

We have something very exciting for you folks that are into the whole secret agent thing, or if you are just a normal person wanting to make sure you are protecting personal property. We are giving you our best hidden camera picks from Amazon! This is going to be a truly amazing product list I promise! We will be evaluating these devices on clarity, price, and performance. It will be interesting to see what we can dig up I promise! I mean, who isn’t interested in cool tech gadgets like this? I remember as a kid I always wanted cool hidden cameras, and with today’s technology you can get them to look like just about anything! 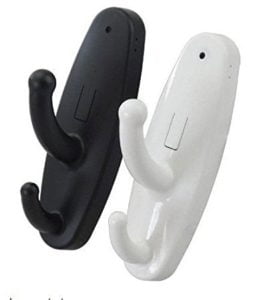 The first item on today’s list of hidden cameras is the cloth hook hidden camera. And yes, I meant what I said, this cloth hook is actually a hidden camera. I believe this device could be extremely useful in most situations until your target decides to hang something on it. However, sometimes in life we have to take those small risks, and I think this one could be a great risk to take. This sneaky little device can be charged via usb and can store up to sixteen gigabytes on either a TF or MicroSD card. This device will also save the video files after thirty minutes of use. You can also expect the Cloth Hook Hidden Camera to record images at a resolution of 1280 by 960 which is great quality for a hidden camera. This is definitely something that is very inconspicuous and until I looked it up on Amazon I wouldn’t have thought anyone would have developed something so sly!

This is a hidden camera that will blend in literally anywhere and everywhere. What we have here is a hidden camera that takes on the camouflage of a picture frame. This hidden camera is best placed on any kind of flat surface like a table, desk, or even a night stand. This is the second product with an activated motion sensor camera that works via wireless DVR. I would also like to tell you guys that this hidden camera even records in high definition, which is always nice for any kind of recording device. The only gripe I have with this item is with the reviews that many people have posted about the device being cheaply put together and it becomes clear that it is a coin flip if you will receive the instructions on setting it up or not. Amazon officially ranked this product three stars and I would guess that if the company took the time to place orders correctly that they would be ranked much higher. That is truly a disappointment, but the product should due itself justice if you happen to figure out how it works. If you do decide to purchase this photo frame hidden camera you need to charge it at least two hours before use and you will need a TF or SD card in order to store the information. In my opinion, it shouldn’t be too hard to figure out since it only has two buttons to configure on the device itself. The grand total to buy this device is less than $30, and for that kind of money it should do the job just fine. Before we move on I would like to add that this device also records audio as well as video. Pretty nifty product! 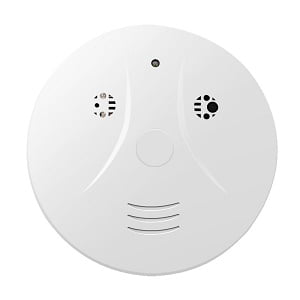 If you want to take your secret agent tactics even further you can go ahead an purchase this Smoke Detector Hidden camera by Romhn. It only allows for eight gigabytes of storage, but I believe it is one of the most unique hidden cameras out there. It records at a 720 by 480 resolution at thirty frames per second and can record for one hundred minutes continuously. In case you are wondering it still captures high definition video and has a built in microSD card so no other accessories will be required for use. If you are trying to catch a thief, or you want to keep an eye on that babysitter watching your kids this would be a great solution, but be warned, this is NOT a real smoke detector and functions strictly as a stealth camera. I had to get that out there in case anyone gets the bright idea of using this product for fire and smoke purposes. If you decide eight gigabytes of storage is not enough this does support microSD cards that store up to thirty two gigabytes, and the product itself is thirty dollars here on Amazon.

If the smoke detector hidden camera didn’t impress you due to its lack of functionality I do have something that can multi task! This hidden camera by Ebo will work as your alarm clock, and as your hidden camera. That is a pretty awesome idea and it is only twenty bucks!

Furthermore, this sweet device has motion detection and motion activation as well as a twelve hour battery life. You will have to buy the TF card in order to store your data as well as a 2200mA battery because this device is not chargeable via USB. The camera has two different video resolutions. These resolutions are 640 by 480, and 1280 by 960. It even comes with a remote control! We can even expect audio recording with the sweet high definition resolution that this awesome unit brings us! Not a bad buy for twenty dollars! I highly recommend, especially if you have valuables in your bedroom or by your night stand. You will be able to catch a perpetrator without them even thinking there is a camera in your alarm clock! 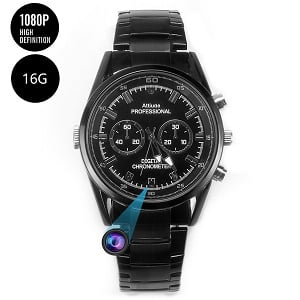 If you are looking to record while you are out in public, or maybe you are into taking your James Bond game even further, I highly suggest buying this Microfox Watch Hidden Camera. This thing has a built in one millimeter lens and records at 1080P! The exact resolution is 1920 by 1080P and it can record up to thirty frames per second. It can also store photos as JPG files, and it saves your audio files as AVI extensions. I believe this is a must have for law enforcement that does not wear body cameras who want that added security in case they get into any trouble with unruly citizens making any kind of false allegations. The camera is so tiny that I would imagine nobody would ever know that it is in your watch itself! I mean, one millimeter? That is super tiny guys! The device itself comes with two different one click buttons for easy use. One is for taking photos, and the other is to start or stop recording video. Simply amazing! Microfox is also willing to give consumers a twelve month warranty and if you are not satisfied they will happily refund your money. It can also hold up to sixteen gigabytes of storage and it is rechargeable through any USB port on your computers or laptops. This is definitely a tool that would be great for crime investigation, or to monitor anyone out in public! I believe this is one of the best products out there and it is only fifty dollars out the door! 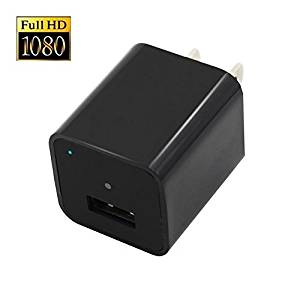 Moving on, we have another awesome device that can record up to 1080p. This product is made by XJW and it is can also have multi function as a wall charger! This device is going to bring more multi functionality to our realm of hidden cameras. The specifications include a 1080p high definition video recording camera, loop recording that will overwrite old files if your memory becomes full, and it also records to a microSD card. However, buyers beware, the microSD card is not included and you will have to go purchase one in order to save your videos for later transfer. Don’t get caught without it or you could wind up in a jam if you are using this for surveillance. The price is a little more than the other stationary hidden cameras we mentioned, but at forty dollars off of Amazon it is still a good deal.

What kind of Secret Agent Are You: Conclusion

All of these high tech recording devices are very sleek and sneaky, but I have to recommend one device to reign supreme. The device that is the winner in today’s article is the almighty MicroFox. I like how it records in 1080p and is rechargeable via USB, and that the camera is only one millimeter big! Hell, you could even use it to play spy for a day if you just wanted to use it for entertainment purposes! I also believe the price of fifty dollars is more than a steal, and I believe this thing should be priced at least at one hundred dollars due to its utility and ease of use. The other devices are very unique and have their place in the market, but you can literally take this thing anywhere, and you can tell this thing was engineered very well. Good looking MicroFox!