After getting a bunch of youtube comments and messages, I have to make a new post about the best mountain bike under $300 dollars. When I bought the Merax Finiss, it was such a good value at less than $200 bucks, but since it became more popular they’ve raised the price numerous times. I’ve had plenty of riders email me and ask if it’s still a good buy at almost $300, and also how does it compare to other models available now. Anyone shopping for a mountain bike in the sub $300 dollar range, is looking for the best value components they can get, while still remaining within their budget for en entry level mountain bike. [button link=”http://amzn.to/24DGDeF” size=”medium” target=”new” color=”default”]Check Out The #1 Top Pick Here[/button]

After taking a look at these other mountain bike brands the youtubers sent me, there are a couple that are a really good value, and would be a better buy if they continue to raise the price of the Merax Finiss. (see my full merax finiss review here) At anything over $300 it starts becoming less and less attractive, because for the mid to high $400’s, you can get a full suspension mountain bike like the Diamondback Recoil with great components. The bikes below are still great buys within your $300 budget, I’m just saying paying anything over $300 for the Merax starts to become a bad value for the quality of the components VS price.

Check out these awesome entry level mountain bikes the commenters sent me! I was amazed at the Schwinn Protocol, and I think it’s a really great buy if you want a good entry level full suspension. Of course don’t expect it to perform like a $2500 Specialized or Trek, since it’s not going to have the more expensive fully adjustable shocks and drive-train for that price range. 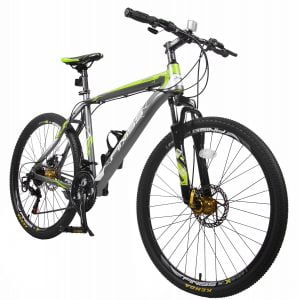 I still think the Merax Finiss is the best value for a good cheap entry level hard tail mountain bike. I bought mine from Amazon with free shipping over 7 months ago now, and it’s still going strong. The best thing about it is the awesome styling, free carrying frame pouch that came with it (fits my iphone, wallets, and keys no problem) make it perfect for an urban mountain bike with light trail riding mixed in. For the money, I’d say it’s still the best buy on the market, and I’d buy another one in a heartbeat. See my full review on the Merax Finiss here. 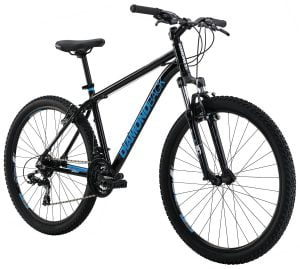 I like the Diamondback brand name, and I know they make quality frames with a good reputation. The Sorrento comes in a close second, but there are a few features it’s lacking compared to the Merax. First off is the rubber v brakes instead of the disk brakes that comes on the Merax. For the record, the disk brakes on the Finiss are not the greatest, and they do take some initial adjustment and still squeak quite often. That said, Diamondback has better brand credibility, and the warranty is much better should you need to contact them for anything in the future. The v brakes will work just as well compared to the level of disk brakes we’re comparing them to, so it’s really just a matter of personal preference here. There is not question that the Merax Finiss wins here in the styling department… you’d be amazed at how many complements I get on it! 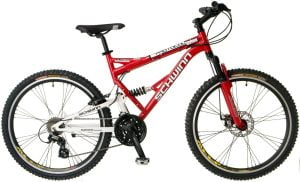 The Schwinn Protocol threw me for a loop the first time a youtube commenter sent me a link to it. He wanted to know if I thought it was a better buy since the Merax price had been going up every time they sell out of them. I took a look at it, and it’s a tough call I must say! It’s not going to be the best full suspension mountain bike you’ve ever ridden, but it looks pretty damn good, has decent components, and great tires. It has a front disk brake setup, with a rear v brake on the swingarm for a little of the best of both worlds which is cool. Because of the frame design, you will get some frame flex from hard pedal strokes like on a long uphill climb, but for the most part this would be a great bike to have in the city to soak up those brick roads and make the seat a bit more plush over the bumps. If I had to do it over again, I might buy this instead of the Merax if I didn’t want another hardtail, but I don’t think you can go wrong with either one for under $300 bucks!

The best hardtail mountain bike under $300 is definitely the Merax Finiss. It’s got the best styling of any bike I’ve seen over $500, and I regularly get compliments on mine and people always ask if I paid over a thousand for it. Sure it’s not the most high end bike, but none of these in this price range are going to be the best bikes on the planets. But for a solid entry level hard tail, it’s going to be tough to beat even at local bike shops. The components are fair for the money, and this mountain bike is perfect for the urban riding through the city that most folks primarily do, with the occasional light trail riding. This bike is not a race bike, and you wouldn’t want to take it off any bike drops or jump the hell out of it to excess either. That said, it’s my top pick for a good entry level mountain bike, and a great value! ( I also ride on myself 😉 )

I didn’t know about the Schwinn Protocol when I first bought my budget mountain bike, but nonetheless for entry level full suspension mountain bike, you can’t ask for much more for under $300 bucks. It features a front disk brake setup, with a rubber v brake in the rear, and also has over 200 4 star reviews with tons of happy entry level riders. The only thing I might upgrade later are the pedals, as they seem a bit narrow on this bike… but it could just be me. The rear suspension sure would be nice to soak up the bumps on those long rides, even if they are just through the city. Most budget mountain bikes don’t come with that great of a saddle, so a little extra suspension always makes for a more comfortable ride, especially the longer rides. Overall I don’t see another brand of full suspension mountain bike for under $300 that you can get delivered to your door with free shipping anywhere on the market! 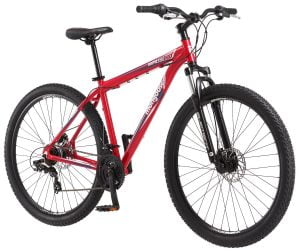 A 29r is tough to come by in this price range, specifically because they usually are a mid to higher end model for most major mountain bike manufacturers like Specialized and the like. I did find this Mongoose Impasse with 29″ wheels, and what looks to be like SRAM derailleurs which was a surprise. (good stuff!) Not that it comes with twist shifters instead of ratchet shifters, but does come with disk brakes front and rear which is another plus. Mongoose has been in the bike manufacturing business a long time, and is known for making quality bike frames, so I don’t think there will be any reliability issues there. The tire and wheel combo on this bike looks phenomenal though, and I I would venture to say it would take a bit more of a pounding than the Merax!

There is one other mountain bike that caught my eye, and that is a brand I’ve never heard of before: Nashbar. It looks like a well made bike, but I’m just not sure of the components and reliability of the brands. If they get some more reviews, this bike could also be a good contender in this bunch!

Conclusion: Which Is The Best Brand For The Money?

While I’m partial to the Merax Finiss since it’s the one I picked, there’s no doubt these other models each have their own unique pros and cons. I still think the Merax Is the best value, but the price was lower when I bought than it is now. The best mountain bike in the $250 – $300 range for the money, is either the Schwinn Protocol if you want a full suspension, or the Diamondback Sorrento if you want a hardtail. The Nashbar AT2 is also a good contender, it just lacks the styling cues of all the other bikes, and isn’t a head turner like my Merax is. If they ever lower the price again on the Merax Finiss, it is definitely the best value out of all of these bikes hands down. (I paid $199 with free shipping when I bought mine, but after many youtube comments people were telling me they raised the price once the brand became more popular.)

3 thoughts on “Best Mountain Bike Under $300: The Top 3 Best Rated Hardtails & Full Suspension For The Money”