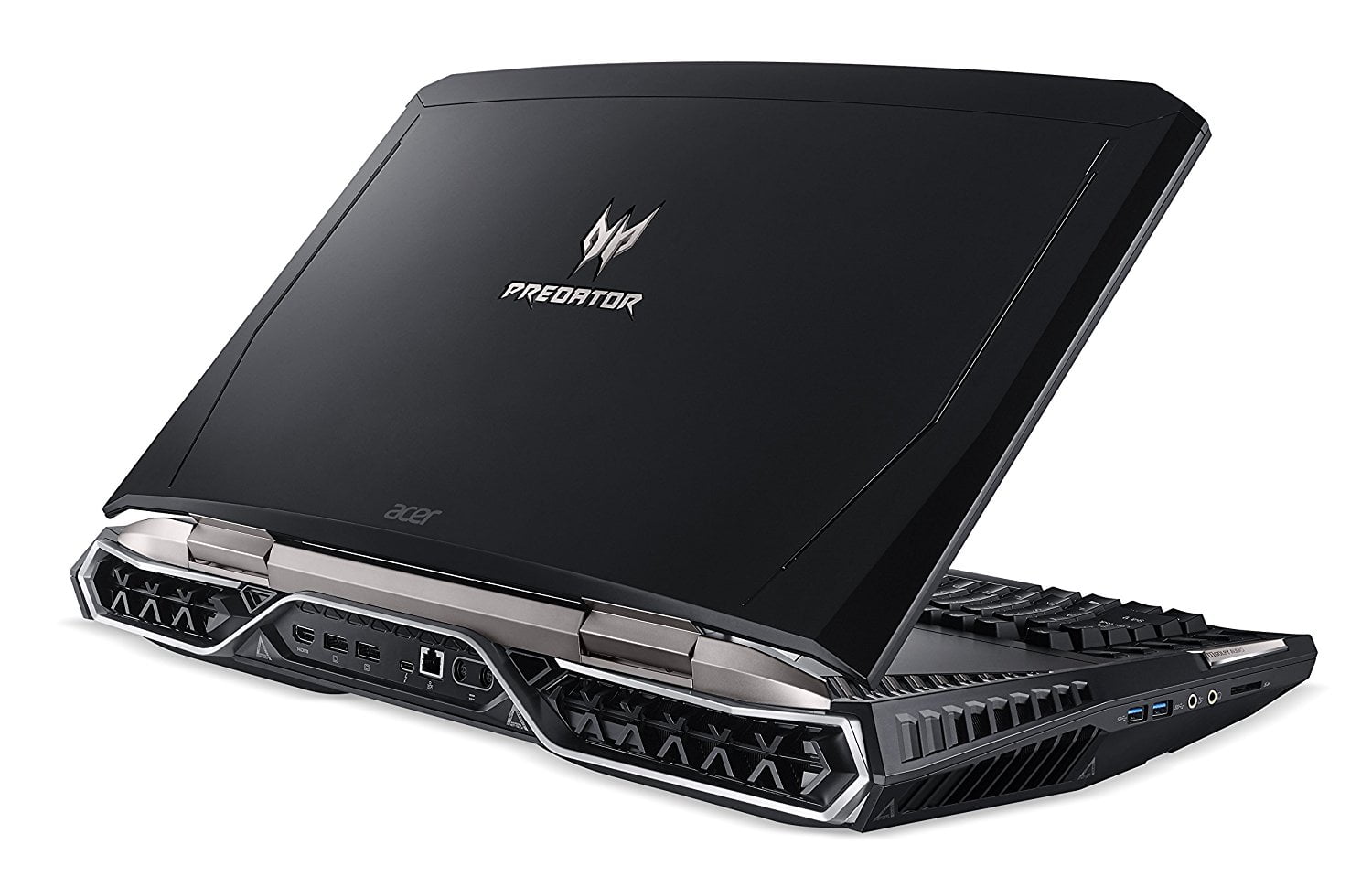 Tech Powerhouses: Laptops with 64gb of Ram who can destroy the competition

Have you ever thought, “man I really wish I had 64gb of RAM so I could run all of my games on Ultra quality while kicking the living hell out of my competition? Most of you reading this probably have, and I know I have as well. But, later in the article we are going to be addressing that issue and if laptops with sixty four gigabytes of RAM really help you gain a competitive edge in gaming. The products we will be discussing today are from MSI, Eluktronics, Acer, and Eurocom. We have seen many of these brands before and it will be interesting who can really wow us with their specs. Let’s get the party started, shall we?

Here you have it. You guys wanted a powerhouse, well you got one. This laptop was made for the gods. MSI has crafted a marvelous treasure here called the Dominator-240 Select Edition. Now I know y’all don’t want the hype, you want me to deliver the goods, right? This fireball comes packed with a sexy sixty four gigabytes of DDR4 RAM. Wait, there is more. Of course this more, and this wouldn’t be a tech powerhouse without more! You can expect to destroy your enemies one by one on this machine with a 15.6 inch display monitor in full 1920 by 1080 HD!

Are you ready to hear the best qualities about this laptop? Let me hear you give me a HELL YES! I believe you, here is the rest of the specs. You will also be in control of a machine that has an Nvidia GTX 1060 six gigabyte DDR5 video card. If you buy this thing be prepared to run those games on ultra-high and I mean it! You will also receive Windows 10, the 64 bit version preinstalled on your machine along with a hard drive that will run at the speed of light. You will have access to one terabyte of memory that is running at a speed of 7200 RPM’s! Is there more Ryan, oh hell yeah there is! You can also expect to have lifetime support from EXcaliber pc as well as a global one year warranty, so if your machine becomes unusable for some reason, just send it back for a new one! I don’t have much faith in laptops, but I will say MSI is really stepping up their game with this one, and I MEAN IT.

You will also be graced with the presence of an intel 7th generation processor, and it is just not any processor. Dramatic pause. This thing is a Kaby Lake Inteli7-7700HQ Quad core processor running at 2.8 gigahertz, but you can overclock it to run at 3.8 gigahertz. If you buy this MSI product, be prepared to outgun everyone in your games, and run software you could only dream of running on your old machine. Enough said, this thing is the bomb and it can be yours for just over $2k on Amazon.

Here we have a new contender entering the ring, and this laptop is developed by a company called Eluktronics. They are offering some serious tech comparable to MSI, so this should be very interesting. I think this laptop is ready to blow you out of the water because it also comes with sixty four gigabytes of DDR4 Ram and a sixth generation 2.6 gigahertz Intel processor that can be overclocked to about 3.5 gigahertz.

Moreover, the screen is a little bit larger than its MSI predecessor, which was only 15.6 inch display; however, this monster comes equipped with a monitor that is 17.3 inches. Unfortunately, the processor isn’t a seventh generation, but it is a quad core so you won’t be losing much processing power, but for the price it might be enough to make you think twice about the purchase. The laptop itself is priced at $2099, but you will also be getting an Nvidia GTX 1060 VR ready graphics card, an anti-glare display, and an FHD webcam as well as a Sound Blaster X-FI sound card. The laptop also comes with a one terabyte hard drive, but they failed to list the RPM’s, so it could be a hit or miss when judging the speed of the hard drive on this one guys, sorry. I should also specify that the keyboard is an RGB backlit keyboard, but I don’t know if it retains the customizability that MSI does, so this is another toss up for those who are interested.

However, for less than two grand, I believe this is a solid buy given the current specifications and I believe it has the ability to compete with the MSI brand; however, are you ready to drop two grand on ifs and maybes? I know I wouldn’t. My suggestion is to go with products you know, love, and trust, and being a new company, they should have listed a ton of other specifications; unfortunately, they didn’t so I am refraining from putting this machine at the top of my list.

We have seen the $9,000.00 dollar tech that Acer can produce, but today we have a predator that is refurbished and price at only around $2k. This is a lot less than nine thousand dollars and should be able to fit your budget if you are looking for power and performance. This laptop does only come with a 15.6 inch monitor, but you will be seeing all of your images in 4k UHD. Damn that’s nice! The processor is a sixth generation i7-6700HQ which runs at 2.6 gigahertz, so unfortunately the MSI laptop will outperform it. But anyhow, it has sixty four gigabytes of ram, and it comes with a webcam as well as a microphone, and with two terabytes of hard drive space I doubt you will ever run out! So, download as much media content that you want! If you buy this product directly off of amazon please know that it is certified refurbished and that it has underwent close inspection to verify that it works properly and as expected! Good deal for the brand name, but I think we could still do better in terms of getting newer tech for the price.

We have another new company that is making some waves in the laptop industry. Eurocom, a company from Canada wants to show you their new hot workstation. This laptop also comes with sixty four gigabytes of ram, an intel Core i7 6700k processor, and an eight gigabyte Nvidia Quadro M5000M, or you can choose to have a single Nvidia GTX 980. They do offer alternative options as far as their processing chips, but I recommend staying with the i7. You will also be able to do your work, and play your games on a huge 17.3 inch 4k resolution. If you want full HD, no problem because this machine allows you to have your resolutions set at either 3840 by 2160, or 1920 by 1080. For the final kicker, you can customize your configuration to have up to five terabytes of hard drive space. Wow, that is a lot of storage! This thing is way overpowered, and so is the price. Get ready to hold on tight. If you maximize your configuration with the Eurocom Sky X9W, be prepared to shell out about $11,000. That could be a down payment on a house, or a damn good down payment on a new car! Personally, I don’t think this machine is worth eleven thousand dollars, and neither should you. If anything, this machine is designed more for professional use, and the average everyday consumer should run away. No need to be taking out a second mortgage to afford a new laptop guys. If you are dead set on checking out this expensive paperweight you can search eurocom laptops in any search engine, but I hope it is just for the sake of curiousity!

Are These Tech Powerhouses Worth The Cash?

When you are thinking about getting a laptop that has sixty four gigabytes of ram and if it has a heart stopping graphics card, you need to ask yourselves a couple of questions before making that final purchase. First of all, why do you want a mobile device that has this much power? Laptops are notorious for running way too hot, and they just don’t have the space needed for proper ventilation. I have had my own set of personal experience in dealing with these overpowered machines, and each time I ended up being disappointed.

For example, two years ago I purchased an MSI G series laptop that came with the works, and I mean the WORKS! It had a fully back lit customizable color changing keyboard, a great Nvidia graphics card, good processor, and a ton of RAM. Whenever I would turn it on to play a game called CS:GO, the laptop would immediately get very hot, sometimes even burning my wrist. It is 2017 now, but from various reviews I have read, laptops still don’t have the space required to install a good cooling system. When these things run at high temperatures for a long time they eventually turn off due to the heat itself, and other things within the machine itself will eventually stop working. It is nice to have a machine that says it can keep up with the best desktops out there, but I don’t think we are there just yet, at least in terms of technology. If I were you guys I would order the machine and try running your most resource intense software on your new hard hitting laptop, and see if it gets hot. If it doesn’t and that machine boasts a great cooling system, then kudos you probably found yourself a real winner. I know many of you are worried more about the hardware that comes inside these things, but if the hardware can’t do its job properly because of heating issues, well you are out of luck anyways. You also have to remember that you probably could buy a more powerful desktop in comparison to these expensive laptops, so are you really wanting a high powered mobile device? And now we are at a crossroads because you have another set of questions to ask yourself.

For instance, “will I get my money out of this thing”, or “do I want a high-end laptop, or do I want a high end desktop for the same price, and probably better hardware”? The last question you should be thinking, or perhaps the “FIRST” question is “why exactly do I want this machine”? If you can answer all of those questions with honesty and you have great use for these power houses, I suggest you go out and get yourself the MSI Dominator-240 Select Edition. If you are going to purchase one of these things you should do it with some style. Go on, live like a king!

Final Question: Do you really need 64 GB of RAM?

This answer might be slight disappointing to the average competitive gamer out there, and I am sorry if it is, but the answer is probably no. However, if you are in the field of academics, or image rendering, then you bet it is worth it. The only Reason you would ever need this much ram is to do image or video processing, or using resource heavy applications. As for gaming, yes this will give you an advantage in most of your competition; but, it really starts to shine in games that are typically open world like most MMORPG’s. I am referring to games like Black Desert Online, or World of Warcraft. The question remains, “is it worth getting a laptop that has sixyty four gigabytes of ram just for gaming”? Unfortunately, in most cases the answer is no. If you are doing a combination of gaming and running hardcore video processing applications, then yes.