Now we’re talkin’!! Finally making some measurable progress up in here! Now all I have to do is add a zero and keep tripling it month over month! 😉 Pretty happy with this month’s income statement compared to the last couple… Finally showing signs of life monetarily at least. One thing I didn’t expect this month, was the Shareasale income boost! A couple articles I wrote months ago got a little traction unexpectedly, and a few sales came in which was a nice surprise. My content is still young, and I’m not seeing consistent traffic stabilize just yet without any outreach (hi links), so it’ll be interesting to see what I can pull off this coming month. I intend to keep doing some content experiments as well that I’ll be able to link to in the future as examples… But I’m getting close to stretching the theme of my site a little too far for my tastes, topically at least. (but I’m going to do it anyway 😉 ) 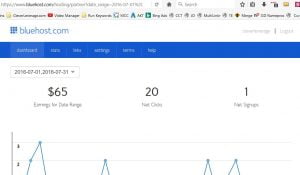 Most of the income is kicking in from content written months ago. Nothing’s been happening fast that’s for sure, and would likely continue the same pattern of one step forward, two steps back unless I intervene on the natural growth.

I notice the biggest boost in this area from the health and fitness improvements I’ve made. Simple things like drinking my distilled water, making daily green smoothies (it’s cheaper than you think!), and going on my leisure walks really really help tremendously in this department…. Better than any online time management tool that’s for sure!

I think the combination of getting away from the computer and out moving around is what does it. Of course I’m still doing my regular M W F workouts three days a week in addition to this.

There are a few tools that have definitely been helping me make better progress as of late:

My youtube ad income is continuing to climb, albeit still minuscule amounts… But hey, it’s actually passive income which is nice. The next month it looks like it’s on track to double completely, and I attribute that to TubeBuddy.

Semrush has definitely helped identify new areas for content experiences and whatnot, and it would have taken a lot longer without it. I also attribute a small portion of my income growth this month to using this tool a few months back for content ideas. Without it, I wouldn’t have made the income I did this month most likely, since it would’ve been another month or two before I got around to writing the same content it pigeonholed for me right away.

What isn’t working is still the same old same old… Consistency, keeping positive belief and not getting discouraged,and continually executing since I seem to be an ideas machine. I still have over 600 posts in my drafts que, some with thousands of words written which is kind of a waste. I still have difficulty producing on a regular basis instead of “researching” or “creating” ideas.

I really thought I could speed this process up given my skills, but it looks like unless I want to start leveraging other web properties I own to build this one up quicker, or build or buy links, things are going to continue at a snails pace.

My Biggest Struggles In My 5th Month Blogging

Didn’t meet my 30 in 30 goal… it was a soft goal, and I didn’t plan it at the beginning of the month, but right around the 5th of the month I said to myself, “ya know you ought to publish every day and see what happens.”

I only published 26 out of 30, and most of those were made up in multiple posts published on the same days since I couldn’t keep up with the pace. I’m going to do it again in August, but I have a few ideas to make it work better and make it more fun as well.

Popular Posts Of The Month:

As I’ve mentioned before, I want to start a niche site or two, and even have some domains picked out for my ideas, but I wanted to validate those ideas by experimenting with a tad bit of content before pulling the trigger on an increased workload. This month I tried a few different experiments with unrelated content here on the main blog, and backdated it so it wouldn’t cause confusion in the new post feed since it’s off topic.

I chose a few different types of topics, including things I know very well like atv parts, and other things like a favorite pastime when I was a kid, which was playing with toy tractors.

I plan to experiment with a few more things over the next couple of months, and try to keep them out of the main navigation so they don’t cause confusion with the main site theme. (possibly switching my theme to a magazine style layout, so I can control what content users hit above the fold on the homepage a bit better.) These posts have made some amazon affiliate commissions, but unfortunately none of them stand out as peak performers thus far, and a few bucks here and there throughout the month doesn’t make me want to jump at any one niche to create a secondary niche blog from. Admittedly these posts are not my best work as far as writing is concerned, but I’m ok with that to test out different article types and see what happens. I won’t do it too much however, to the point where it dilutes the main site topics.

Featured Tutorials Of The Month

I didn’t post any new tutorials this month. Instead I started fixing the rest of the site layout and primary pages, which still aren’t done. I have many left that are incomplete and half finished, and want to get that wrapped up before I go creating more chaos with new content. I have about 80 posts published to date, and around 30 pages, so I’m due for some upkeep/house cleaning.

Featured Question Of The Month

I didn’t do any new questions of the week this month, same reason as above.

I want to do an income report roundup series, since my personal income reports don’t exactly inspire me at the current level they’re at… But there’s also one thing that irks the fuck out of me with other blogger’s income reports.

The people who are posting freelance income and all this other bullshit just to inflate their numbers, and are misconstruing a normal expectation from the early stages of blogging. Not really a huge deal, but when you research bloggers to write about, and then find out that the last few months income has been from freelancing, selling products outside of their blog reach, and so on, it’s like WTF man. In some of their defense, I get that certain freelance income wouldn’t be possible without their blog presence… But you don’t see me commingling my other income sources, so I find it a bit disheartening and inauthentic.

How can I make these income reports more helpful / useful for you? Comment below and let me know!