My newest infatuation is these off grid self sustaining earthship homes. I love the idea of building a structure that works for me instead of me continually working for it. The idea of being as self sustaining as possible, and using passive solar and rain water capture recycling is very appealing, but I think the feature I love the most is the indoor greenhouse! Makes so much sense…

That said, I’d love to build one of these in Maine on my the property I grew up on as a kid. I see some design issues with them, as they originated from the hot desert like climate of Taos New Mexico… But that doesn’t mean it can’t work, there’s just so many elements I love about this concept.

I’d like to get some discussion going in the comments, hopefully from experienced builders more knowledgeable about cold weather eco solutions than I. I go to Central Maine every year, and would love to build one of these there!

This is the nicest passive solar off grid earthship I’ve ever seen! I had a hard time finding info on this earthship, but my hats off to Michael Reynolds of http://earthship.com and Scott Maybee of http://seven-directions.com

Located in Big Sky, Montana, this is an earthship design I’d like to model in Maine, seeing as it’s holding up well to the cold climate. Still have a couple questions about why they design the front greenhouse windows  on an angle… I don’t see how you can leave the earthship for months at a time without brushing the snow off the windows. A  taller roof line, with an overhang, seems like a better design option to me if you’re not going to inhabit the earthship year round like I wouldn’t.

Other problems I see are deep snowfall piling up in front and around the earthship… This is especially a problem with the greenhouse frontage yet again, and seems like the foundation should be elevated to allow for 4-5 feet of snowfall to pile up and not interfere with sunlight if left unattended for a little while. Thoughts?

I found a few earthships that have been built in snowy areas, but none of them really seem to get dumped on with heavy snowfall. I’m curious if there are some out there and I just don’t know about them?

Update – Welp, found some good and bad ones…

I found this earthship in Canada, but I never see any serious snowfall on any of these suckers!

Yowzers! This guy has had some serious problems with his, even though it does seem like an older style/design.

Other sources of discussion for potential issues:

My Ideas To Mitigate Snowfall Problems In Cold Weather Climates

The angled greenhouse glass is going to be a NO-NO unless sit has solar powered heat strips, and even then, probably shouldn’t be left unattended for long periods of time. (like I plan to do)

Possibly by going with vertical glass snow accumulation could minimized a bit, along with a much higher roof line to try and make up the the light penetration through the greenhouse?

Keeping it single story, but just going much higher should allow for the same amount of light penetration as the angled windows, but I don’t have it worked out for Winter/Summer angles/temp preservation. Of course a large overhang would also help keep the snow from piling up right next to the glass, but I’m not sure how that will affect other elements of the passive solar gain. 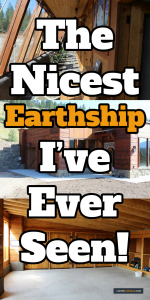 Doing away with the butterfly roof joints near where the greenhouse and main roof meet are obviously a bad idea. Extra long Vegas that extend well past the french door wall would allow for one continuous roof that can carry the load of tons of snow, and also zero joints for no leaks. I can’t imagine how much havoc frozen water would cause if it penetrated the roof joints.

The is the #1 thing I haven’t seen any signs of in any earthship build. Understandably, they want to keep the foundation as low as possible, so that any foundation and footer half walls add as much solar gain as possible. But there’s no place for 4-5 feet of snow to accumulate, or be swept away by a plow service if you happen to be away.

Update – This house has a lot of good properties for shielding the elements, and still gets solar gain from the South with overhangs… Could be good ideas to implement.

What do you think? Any other ways I haven’t thought of that might work better?