So I bought this infrared sauna on Amazon from a company called JNH Lifestyles. it had amazing “reviews,” (in quotes, because I don’t know how real they are at this point) and the sauna claimed to be “zero emf.”  Well I don’t know about you, but zero to me, means just that… zero. As you can already tell, after I got done with this massive pallet delivery being unloaded from a semi tractor trailer, and spent the next couple hours both vacuuming up the saw dust falling out of it and putting it together, it was pretty damn frustrating to find out that this thing is in no way shape or form ZERO EMF. In fact, I would later learn, that there is NO SUCH THING as zero emf. it simply doesn’t exist, and anything that plugs into a wall outlet, WILL have some level of emf.

JNH Saunas Has Thousands Of 5 Star Reviews On Amazon For Their ZERO EMF Sauna (how the hell did this happen?!?!?)

So now I could see why JNH Lifestyles would run with this as a marketing claim, since anything under .5mg is technically in the safe range. But to call their product a “NO EMF” sauna, is simply marketing hype and an outright lie. And yep, I bought into it hook, line, and sinker. Truth be told, the sauna DID turn out to be low (er) emf, but I wouldn’t find this out, without spending another $1,000.00 dollars on EMF meters that are able to test this kind of thing. And if the deceptive EMF marketing claims would have been the only problem with the sauna, I probably would have kept it and been happy with it. But JNH Saunas didn’t stop there… As you can see in my JNH Lifestyles Ensi review, the infrared sauna I paid more than $2,500.00 for from Amazon.com, was full of sawdust, made from plywood scraps, and had the shittiest build quality of any sauna I’ve been in.

Why Am I Pissed?

People are being fooled left and right by false claims from sauna companies that only sell online, and then have INSANE return policies, whereby the sauna company gets to basically recover ALL of their costs on the product, and the customer is left with a burning hole in their wallet, and a sauna that’s more fit for a bonfire in the backyard, instead of detoxification.

Now I was already a professional blogger and a YouTuber before I started having health problems back in 2016, and when I got my my mercury amalgams removed in May of 2017, I had no idea I’d end up blogging about health products. But it’s been a rough road, and I now realize how vulnerable people are when they’re suffering, and I sympathize with those that don’t have their whits about them, just as I didn’t during the many phases of my heavy metal detox.

In short, it’s very easy to be taken advantage of when you’re not well, and you’ll buy in to anything, and spend practically any amount of money on anything that will help you get better. I don’t know how I will transform into incorporating health content here on the blog, but with over 1,000,000 views on YouTube already before this health debacle even started, I feel it is my duty to incorporate this somehow, so other people don’t have to waste time and money like I have on bullshit products from China… after all, health is wealth at this point.

The Rub: JNH Lifestyles Claims To Have A “No EMF Sauna” 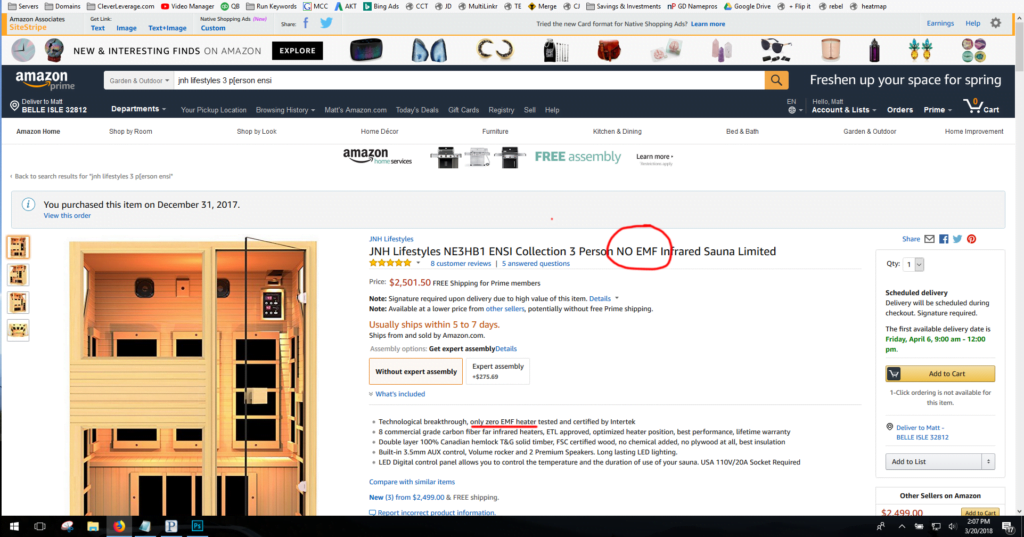 They Market Themselves As Being Cutting Edge

I mean seriously, this thing looks like it was put together by a 5 year old with elmers glue.  The heaters were covered in dust, window trim literally broken off and screwed into place, and wood shavings left and right coming off the plywood paneling.

If that wasn’t enough, things were moving around inside the cardboard walls, and then general fit and finish was incredibly misleading with the fake mockup Autocad photos they show on Amazon.

The design of the cabinet was awesome though, I’ll give them that. The glass was great, and never once did I feel like I was claustrophobic.

And, I must admit, it was indeed low emf throughout the entire sauna. Not NO EMF, but low emf… as in under 10mg the whole way through. Kudos to them.

That said, the damn thing would hardly heat up a cup of soup, let alone a 220lb human. I don’t know what good it is really, except maybe for firewood?  I like fires.

In Reality, Their Saunas Come Straight From China With High EMF Floor Heaters In Them (and haven’t even had the saw dust vacuumed out) 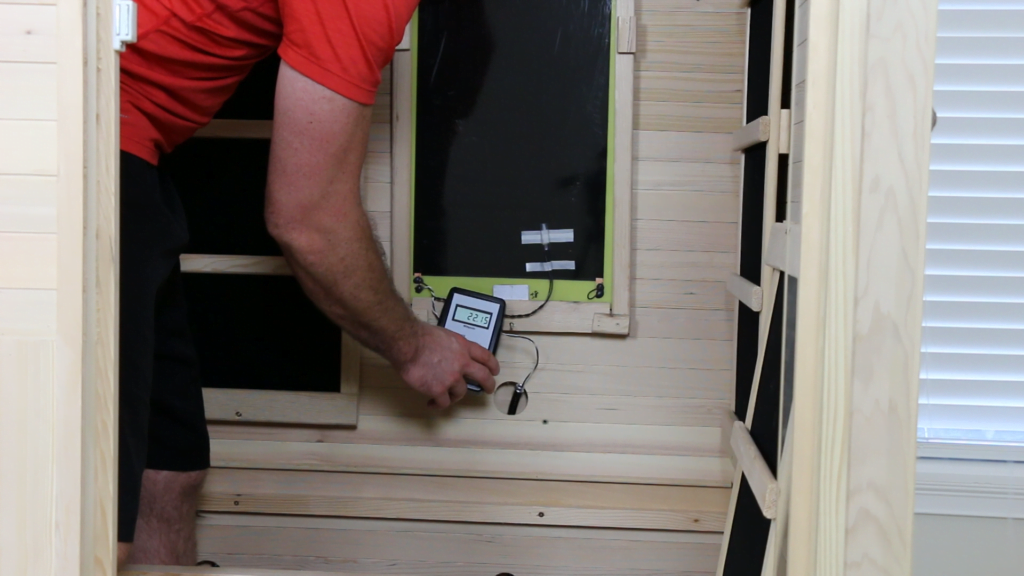 Where Are JNH Lifestyles Saunas Made? You Guessed It… China Baby.

Their Infrared Heaters Are Poorly Made, And Are Literally Screw On Frames Made From Scrap Wood

And To Top It Off: This Company Flat Out Lies About Being “no emf” If You Test It Right 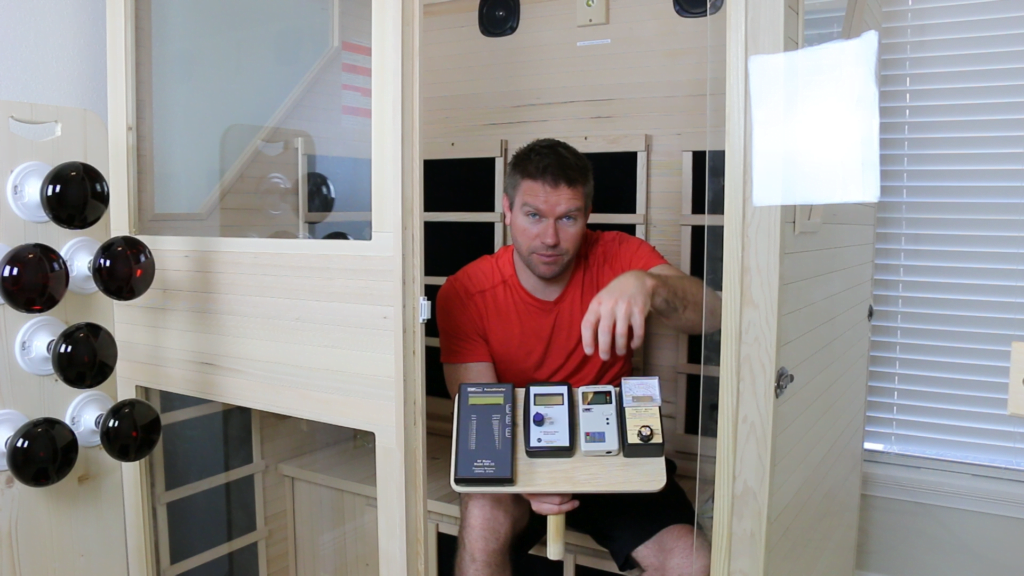 JNH Saunas Simply Uses This “ZERO EMF” Claim To Get A Leg Up On Competitors, And Get People To Buy In To Their Brand

So it worked on me, and clearly it’s working on thousands of others. However, if I had seen real up close p[pictures like this of the build quality, instead of the fake mockup pictures rendered by a graphic artist that you see when you buy it on Amazon, I would have never bought it.

I don’t see how other people can be happy with this sauna. It IS indeed low emf, but not zero emf. I consider it a safe sauna, but what good is a safe sauna if it’s not powerful enough to make you sweat?

At First I Thought It Was Just Me & I Was Being Harsh: Turns Out I’m Not The Only One, And Others Are Reporting The Same

In this JNH Lifestyles infrared sauna review, I take you through my experience with buying in to a zero emf sauna… or at least, that’s what they claim. From saw dust falling out of the panels straight from the factory in China, to it barely heating up to 140 degrees after an hour (in a warm house in Florida mind you), this plywood sauna that looks like someone threw together a shed made out of scrap wood doesn’t belong in anyone’s home. At least that’s my opinion anyway after spending $2,500 bucks on it, and not being able to use it for my niacin detox to get rid of my heavy metals.

Hopefully my JNH Lifestyles Ensi “Zero EMF” Infrared sauna review video, should help you avoid wasting money on another false marketing scam like I have. But this wasn’t the first sauna I bought, it was just the first infrared sauna marketed as a “no emf sauna” I bought into, which I would later find out doesn’t even exist. (there is always some minor level of emf present with anything that plugs into a wall… this is nothing more than false marketing to take advantage of the public) The listing on Amazon actually says, ZERO EMF to be clear, which I would quickly find out isn’t true at all.I don’t know about you, but when someone tells me zero, that usually means zero right? Heh, obviously not to JNH saunas it doesn’t!

And don’t even get me started on the pictures looking nothing like what you actually get once you take it out of the box. (they are nothing more than photoshop/autocad renderings, not real photos) After buying the Dynamic Barcelona as my first home sauna, and getting some emf meters to test for magnetic fields after seeing in the sauna group that a lot of these saunas come from China, and aren’t checked for EMF ratings except for what the lying manufacturers say, I had a feeling I was screwed out of another $2,500 bucks on another sauna. Luckily for me, I bought in on Amazon instead of direct from the manufacturer, and was able to return it. But you might not be so lucky, which is why I’m making this JNH saunas review…

My Review Of The JNH Lifestyles Ensi “No EMF” Infrared Sauna

I wanted to love this sauna, because I really did like the cabinet size and design with all the windows. Compared to all the other saunas I’ve tried, this was the most open and free feeling, and never felt confining at all because of all the glass.

However, the more I put it together, and the more I sat in it, the more I realized this was a steaming pile of shit made from scrap wood. Seriously, watch my video to see how they just break off pieces of furring strips to attach the window glass, instead of taking 30 seconds and cutting it with a saw. Very poorly made.

I noticed right away when unboxing the sauna, that the wall paneling was lacking some sanding or milling of some kind. The wasn’t splintered per say, but it definitely had frayed edges and wood peelings from the paneling coming off of it. I also didn’t like how all the heater grills were covered in saw dust and markings, which I coudn’t really get off later.

Putting the sauna together was relatively easy, and I was able to do it by myself. There were a few joints that didn’t line up and whatnot, but overall it was okay. The build quality obviously isn’t that great, which you can see in my video. Some of the screw holes didn’t line up in the roof, even though they were pre-drilled, resulting in the screws splitting the wood and poking through on the inside of the sauna. (not something you want to see on the $2,500 piece of bonfire wood you just bought)

Do I Recommend It?

Why Do All These “Sauna Review Sites” Recommend JNH Lifestyles Saunas, And Rank Them As Top Rated Saunas?

You see Amazon will let anyone sell anything for a commission, and these guys are master at putting together top 5 lists of products, without ever having touched or used a sauna in their life.

They don’t care who buys what, as long as you buy something. This is how they make their living, but the trouble is, it’s so misleading for people, and you end up with a several thousand dollar hunk of wood that you have to pay $500 dollars just to return, plus other costs if you buy from JNH Saunas direct.

Bottom line, don’t buy any sauna on the market unless you see someone live on video reviewing the damn thing. These lying sauna companies can’t bet trusted at all. They will say anything in their marketing to get you to buy, and all of them come from China no matter what they say.

Update: just to make sure I’m not crazy, (even though I have more emf test equipment than anyone I know) I searched around to see if other Amazon customers had the same results as me with their JNH Sauna.

Turns out they did:

This isn’t the exact same model as the one I bought, but another JNH Sauna Joyous model looks to be even worse EMF wise!