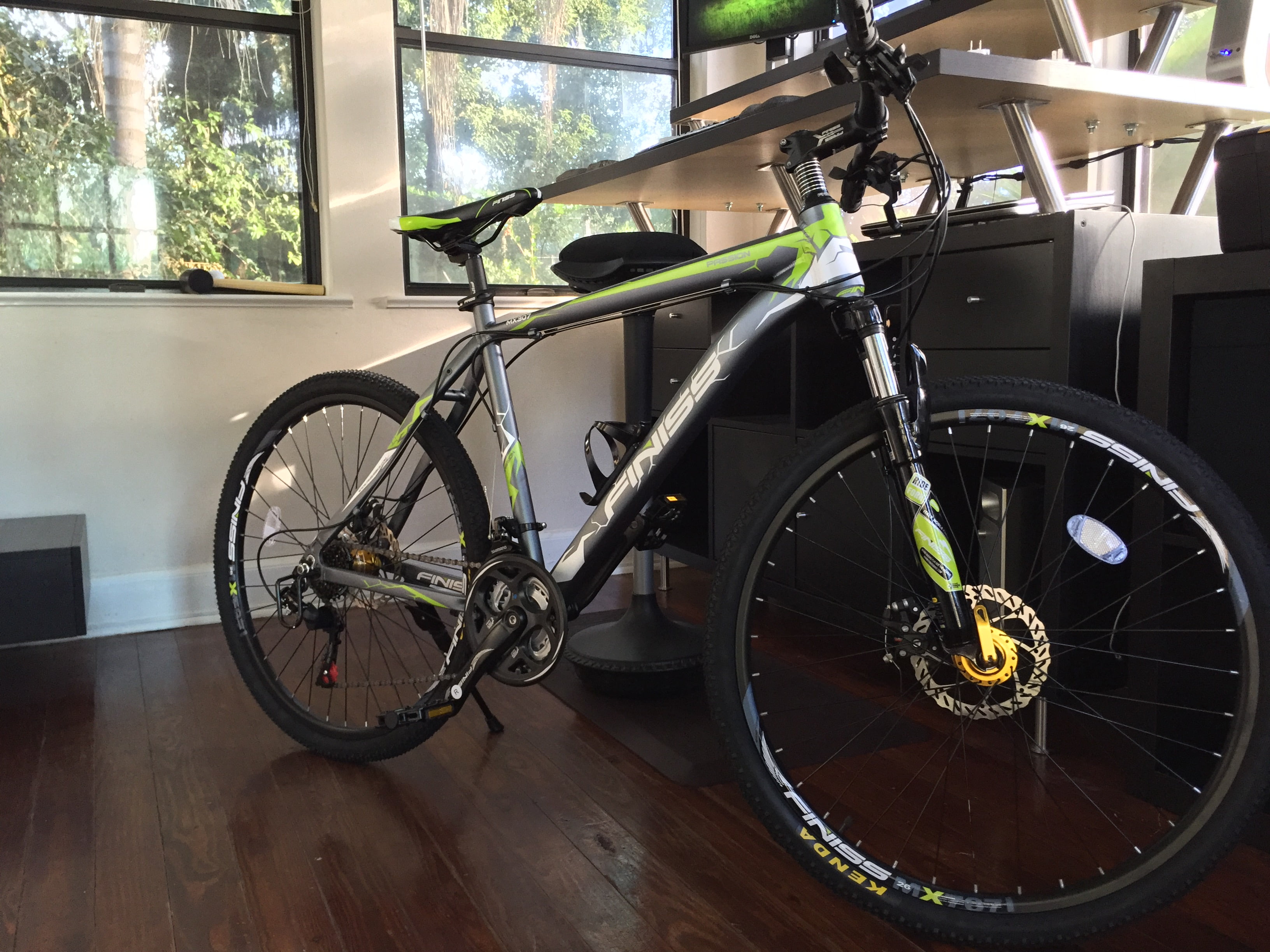 This is my 2016 review update on the Merax Finiss, complete with pros and cons from my experience riding this bicycle for the last 5 months. I purchased this bike back in the beginning of November of 2015, and have been enjoying riding it around Central Florida ever since. (both on road and light off road use) If you’re looking for one of the best cheap men’s mountain bikes for under $200 – $300 dollars, this will blow anything you find at Target or Walmart out of the water!

Update 1/23/2017- I just found out that Merax released a full suspension version mountain bike… and it’s currently under $200. For all the people that have been emailing me or commenting on youtube that the price of the Finiss keeps changing, this might be a good affordable option for you. I can’t comment on the reliability or performance, since I haven’t tested it out yet… But it looks super cool! 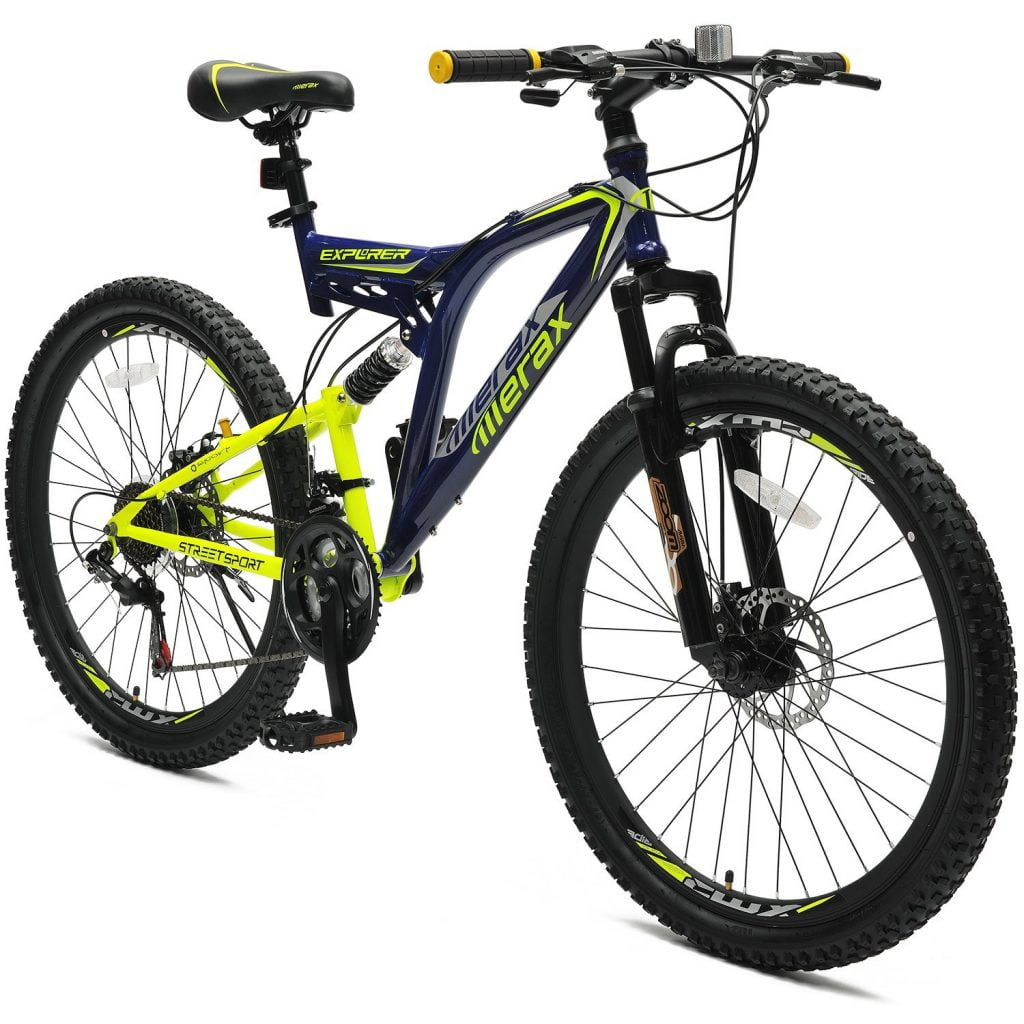 You might not want to spend time reading a long comprehensive review or watching videos, so I put together this quick overview section, with the detailed breakdown of my real world experiences further down below. (and my original post here)

Keep in mind my intended usage for this bike was mostly for riding around town in Downtown Orlando, with the occasional ride through the park trails.

Would I buy it again?

Yes most definitely! I’ve gotten a lot of enjoyment out of this bike, and it’s well worth the money. I paid $199 with free shipping when I bought it on sale, but youtube commenters keep telling me the price is fluctuating quite a bit from $249 – $269 depending on the color you choose. It’s still a good buy at anything under $300 dollars, but I wouldn’t pay more than that. (once you start getting close to the $500 range and up, I’d go with a different brand that comes with higher end components like a Diamondback.

2016 Updated Review Video – Final Verdict After Riding It For 6 Months!

I’ve had this bike since November of 2015, which is a solid 4 months. It’s performed well in a variety of situations, and has allowed me to enjoy some city bike rides and light trail riding during that time. It’s comfortable, stylish, and the bike supports me great at around 205 lbs. The accessory pouch is not an add on, and comes with the bike believe it or not! This was my favorite surprise about the bike, and have never had one before. I can’t stress how nice it is to have a frame pouch to put your phone in, listen to Pandora, etc… I love this mountain bike for an entry level bicycle!

I covered just about everything you’d need to know in the video above, but in case you can’t watch it, make sure you buy some Locktite when you order the bike for the main seat bolt. For some reason, even if you do an awesome job at assembling it, it has a tendency to work itself loose when you’re out on a long ride. (not a big deal really, I just toss the allen key in the frame pouch!) 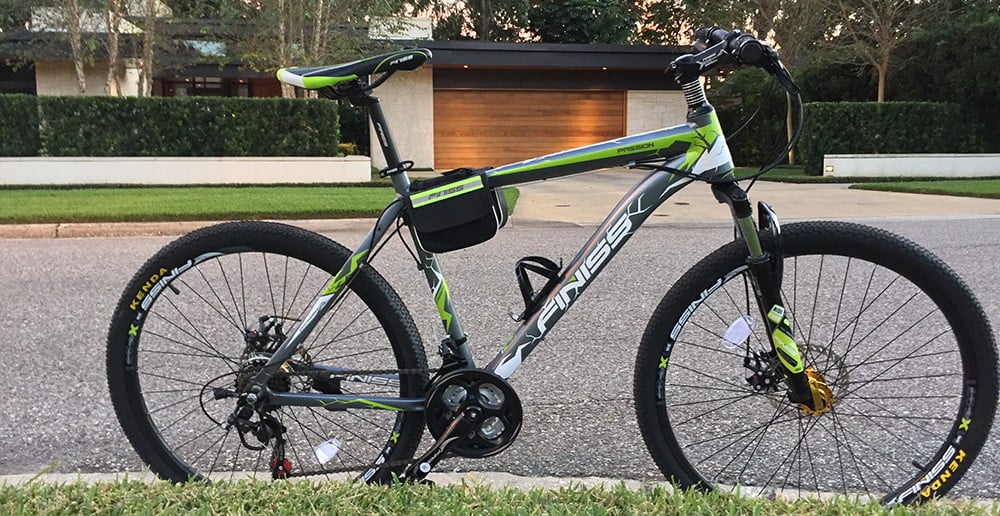 Other Reviews (how it stacks up)

Please note – There is a road bike version of the Merax Finiss that is different from the mountain bike. They are NOT the same.

Note – I decided to remove these references to other reviews that I pointed out before I made my own. I don’t think any of these people have actually ridden the thing, let alone purchased it. The last thing I want to do is be including bogus information in my review, that isn’t from people who’ve purchased the bike at all!

To summarize what the complaints were from others, it’s the same nit picky stuff that you have to do to any $200 – $300 bike you don’t buy already assembled at a bike shop:

You have a choice: you can either get a cheaply made bike from Walmart or Target that’s already put together, or you can get a better quality bicycle like this one, you just have to assemble it yourself. A guy commented on my first unboxing video on Youtube, and has been complaining because “the brakes squeaked.” Of course the brakes squeak until you adjust them! The handlebars have been twisted sideways in the box, which puts uneven pressure on the brake cables… So once you assemble it, they just need a slight adjustment. I’ve added a youtube video to the Merax Finiss playlist that covers how to adjust the brakes now as well.

Update – now that more people have purchased this bicycle, there are now over 50 other reviews of this mountain bike on Amazon. I haven’t done more than spot checked the quality of their Q&A’s, but for the most part the 4.5 stars out of 5 is in line with my experiences too:

I just got this bike today. I took it to my local bike shop for them to set it up. (40.00) bike looks great rides real smooth shifts great and has good quality hardware and brakes. The negative for this bike is the front shock. This is why the bike is 200.00 they went cheap with the fork. Im 265lbs and i bottom it out. I ordered a shock for 100.00 with a lock out for the bike. The only reason i didnt give it 5 stars is because of the shock. Other than that the bike is comparably to a 700.00 bike at my local bike store. My friend just bought a 700.00 bike and this bike has all the same hardware except the front shock!! The frame even looks the same. This bike is very well built for the money. I love it and i will love it even more when my new front shock with a lock out gets here!!!! – Review by Jared

*Note – many people are still confusing the road bike with the off road version in my youtube comments. To be clear, I have no experience with any of the road bikes, and only purchased the mountain bike. Although their road bike model looks pretty sick too! I come from a background of riding bmx and mountain bikes, and am not really an experienced road bike rider… So can’t comment much on that style. For a cheap mens entry level mountain bike, the Finiss is still hard to beat! My original review with the unboxing and assembly videos, can be found here.

If you’re watching my assembly videos on youtube to put it together after you buy it, make sure you watch all of them… I made a mistake that first night when I tightened the handlebar stem. The fork wasn’t facing the right way, and I didn’t even look down to check it until the next morning when I got up to take it for a test ride.

I’ve gotten several questions from other people on youtube that I’ve tried to address in all my videos. Is it the best high end racing mountain bike on the planet? No. Is it the best entry level mountain bike under $200 – $300 dollars where you can get out riding without breaking the bank? Absolutely.

You can see the rest in this playlist on Youtube.

Where are the limitations of this bike?

I wouldn’t take this bike to downhill trails or start jumping it like crazy. This is not a $2,000 race bike (even though it has the styling of one!), and I wouldn’t trust this frame or components under those conditions or steep drops. The front fork leaves something to be desired if you starting riding it hard as well, but this is probably largely dependent on how much you weigh. (I’m 205lbs right now and it’s good, but I saw in a couple of the reviews on Amazon that it bottoms out if you’re 260lbs +… Keep in mind, most all forks will do that if you’re at that weight, and you need to have a bike shop re-valve/re-spring them for you) That said, it’s a much higher quality beginners bike than you’d find at Target or Walmart in my opinion, and it’s hard to deny the styling of this bike… I’ve said it before, and I’ll say it again: This bike looks like an $800 race bike when you unbox it… I was very surprised.

Most people are also using mountain bikes in urban environments these days, with the occasional off trail joy ride. If you’re looking for an affordable, yet stylish ride, this is the ticket. Keep in mind that if you outgrow the technical abilities of a novice model and want better components to start hardcore trail riding, you’d easily be able to sell this bike on craigslist for close to what you paid for it. For the majority of people out there (95%, even beginner trail riders) this bike will perform great and you will be very VERY happy with it!

Would I recommend this bike to friends and family?

Yes I would, and I’d also buy it again for myself. But it’s looking like the Finiss will last me quite a while, and I won’t have to buy another bike for quite some time. I should get a ton of enjoyment out of it, and hundreds, if not thousands of more rides.

The only things I would add now are some lights. I still don’t have any, but almost got hit the other night riding home from a workout, so it’s probably time to order these:

Do you know where I can find company info on Merax Bikes?

I’ve had people send me messages from youtube after coming across my review videos, asking if I know anything about the manufacturer, who makes Merax Bikes, and if I know any details about the manufacturer? I don’t have any additional info, I’m just a regular purchaser on Amazon and happened to buy this bike. I think the main concerns were before the bike had any reviews so people were skeptical. Now that a bunch of people have bought it, there’s plenty of reviews to double check. Normally as long as you’re buying a Prime item from Amazon, there’s not much to worry about… they will take care of you, even if the vendor falls short. Even times when I’ve had issues with third party vendors on Amazon, I haven’t had an issue, it just takes longer to get your money back.

This has been sent to me to provide a guide for buyers of the Merax bicycles from the company itself. It looks like Merax.com now has a bike help center for frequently asked questions, and tips on how to adjust the bike when you put it together. Some of these guides look specific to the road bike components, but the process is the same.  http://www.merax.com/helpcenter.html

Current Price And Where To Buy The Merax Finiss

I bought mine from Amazon, and frequently it’s either a Prime item or has free shipping… My buying experience was great, and I would order it again through them…

13 thoughts on “Is The Merax Finiss The Best Entry Level Mountain Bike Under $200 Bucks? (my final thoughts after 5 months of riding it)”