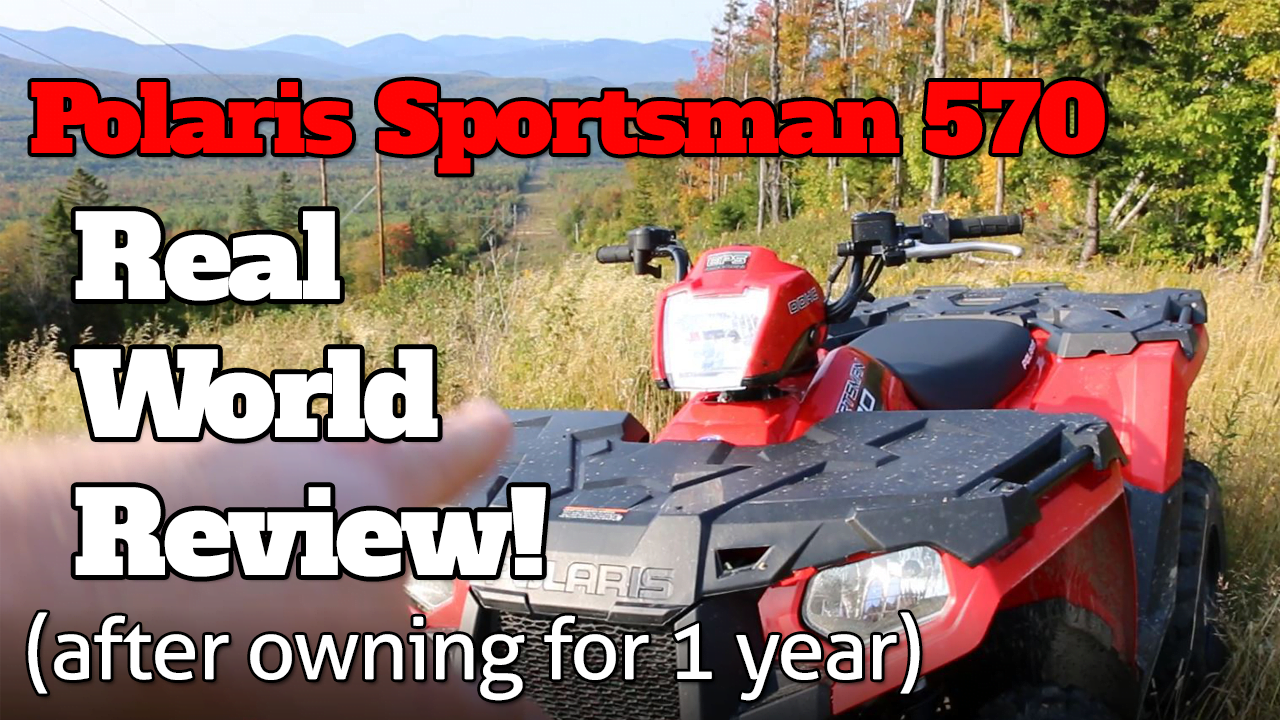 I see a lot of Sportsman 570 reviews out there, and a lot of them differ from each other quite a bit. Some people are immediately modding them, throwing giant swampers and lift kits on them, while other people are throwing an exhaust and a gun mount on for some camo action. Me, I’m just a regular rider who comes from sport quads in Florida, and I was looking for the most economical, most powerful 4×4 ATV to keep at my grandmother’s cabin up in Maine for when I can get up there. First things first, I absolutely love this bike, which I never thought I’d say in a million years since I prefer much lighter sport quads. However, that’s just not an option for some of the things we need to do around camp, like hauling a trailer for firewood, dragging trees, and things get pretty soupy in the spring of the year too. I wanted a four wheeler that could do it all, and I think I found it. Sure it has some pros and cons like everything, but for the money, I don’t think there is a better entry level 4×4 with this good of ride quality and power. I have had some things I didn’t like pop up, which I’ll talk about more below in detail.

– The power (plenty of pull to yank the front tires off the ground, or sling it sideways in the corners at will… something you could never do on a lower priced Honda)
– The ride quality is amazing (this alone, is one of the biggest selling points. I know some parts are not as reliable as some of the sealed bearing units on the Hondas & Yamahas, but man a little maintenance every year is worth the plush ride down the trail. I regularly see people getting bounced around ahead of me, and I just glide right over it like it’s not even there.)
– Under rack front storage – (seems stupid, but I just love this feature. Now I don’t have to get off the biek to grab a drink from the storage box in the back, or make a passenger get off in order to open the lid on the two up seat box… super convenient. Seems dumb, bit I wouldn’t want to live without it now that I’ve had it!)
– 2wd/4wd (tons of people say that Polaris four wheel drive doesn’t engage. I don’t know what planet they’re on, but it works damn good. I LOVE the 2wd selectability, and it makes it WAY more playful when you’re not working with and having fun on the trail. This is probably the sport quad enthusiant in me talking here…)
– EPS (many say you don’t need it, and I agree! But man it’s nice to be cruising along with a drink in one hand, and never have the bars ripped out of your hands from a stump or rock again)

– Squeaks (hole. E. shit. does it ever squeak when you first break it in. The motherfuckers from the neighborhood hear you coming a mile away for Christ sake. Forget sneaking up on any deer, you sir are dunzo. — Fortunately this goes away after a short while, but in the initial breka in perdiod the front a arm bushings, rear sway bar bushings, pretty much everything squeaks to hell and back on this thing. After 100 miles or so, the only thing left squeaking is the steering stem)
– EBS ( I hate it. It’s way too stiff when you first get the bike brand new, and it takes forever to loosen up. It will literally throw a passenger into your back if your throttle control isn’t on point, and will likely lock up the rear tires coming into a turn before you even tap the brakes if you ride it hard like I do. Great feature, just not my personal preference on the engagement. Wear your seatbelt boys!)
– No steering stem grease fitting!!! – (to this day the steering stem squeaks. Drives me asbolutely nuts. There is an access point under the plastic, but nada no zerk fitting. I’ve tried all types of lubricants, but fact is you have to squirt it constantly to avoid having the annoying squeak down the trail.)
– Gets hot, real hot – (like all the reviews of Sportsman say, it does indeed get hot. As a slow crawl through the woods after a long ride, it’s damn hot on your leg with no air movement. I bought an exhaust wrap, but never put it on. No plastic is melting or anything like that, just uncomfortable at slow speeds and while wearing shorts. However, I’ll take the wheel spinning power over some extra heat any day of the week!)

Where I Bought Mine (Absolute PowerSports, NH)

underpowered, junk suspension compared to the sportsmans, and overall less fun. I think the power alone would have made it a dissappointment, since it’s not really a true 500cc machine, and the 570 is a really strong machine for a 500cc class atv.

Comparing Other Brands And Models To The 570 Before Buying

I did not just run out and buy the 570 either, I looked at a ton of models, and have always always believed in Honda. But let’s be honest here, sometimes Honda’s can be boring, even though you get what you pay for. Honda makes the most reliable machines on the planet as far as I’m concerned, but they also ride a bit rougher, and don’t have as much power as some other brands that require more maintenance. Just depends on what you’re looking for I guess…

I thought about getting a Foreman, but it was a little more expensive, with less horsepower overall. Now in hindsight and owning the 570 for a year, it would have way under performed the 570 in just about every division except reliability and built quality.

There is no way in hell this thing would ever keep up with the 570. The grandfather has one next door so I got a real live comparison, but there simply is no comparison. It it’s defense, this particular Rancher has NOT been well cared for by any means, but it simply isn’t in the same class of ATV as the 570… and I only even considered it for a second because it was more affordable.

The Rincon was my only saving grace for getting a Honda. But at almost $10k out the door, I’d rather have a Sportsman 850 or 1000 with nearly 100 HP on tap, with amazing suspension. If I owned a farm, and wanted a decade lasting workhorse with occassional play time, the Rincon would be the way to go.

Solid bike, build quality is probably better, but again for the exact same price range as the 570, it’s going to be under powered.

Definitely a contender for sure, and one of the models I think I would be happy with all the way around. Again, it’s getting close to the big bore 100 horsepower machines, so I’d probably opt for a Sportsman 850/1000 or Outlander 1000.

My Wishlist For The 2019 Sportsman 570 From The Factory

Don’t Polaris’s Break All The Time?

What About The Exhuast Heat?

The Ride Quality Blows Everything Else Away In The Sub $6,000 Range

Where Does Yamaha Fit In? (Kodiak or GRizzly??)

Why I Didn’t Buy A Can Am (but maybe should have? LMK in the comments!)

Would I Buy A Sportsman 570 Again, Or Upgrade To A Different Model?