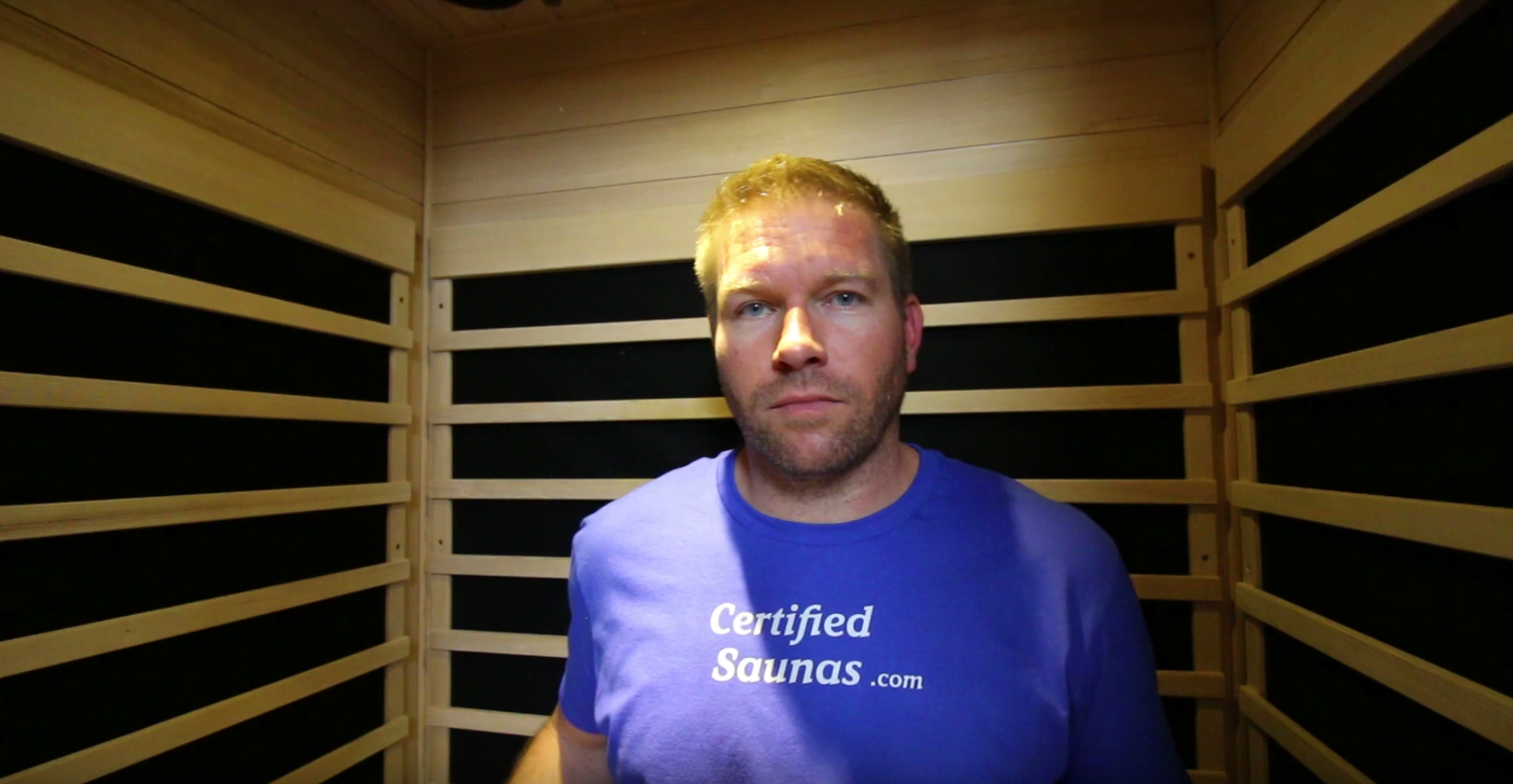 Guys I’m sorry about creating confusion about Radiant Saunas being related to Radiant Health Saunas. I’ve been getting a lot of questions about why I bashed Radiant Saunas a while back, but now I’m recommending them.  The truth is, when I bought my original Radiant Sauna (by Blue Wave) from Amazon in 2018, I had no idea there was another company out there that was totally different. In truth, I had indeed come across Radiant Health Saunas prior to purchase, but didn’t have the experience with saunas way back then to realize that a different manufacturer was behind the knock off brand featured on Amazon.

My Radiant Sauna Experience (from Amazon)

As you all know, if you’ve seen my Radiant Sauna Review (made by Blue Wave), you know it was the worst infrared sauna have ever tested in my entire life. Smelled like adhesive, 100mg magnetic fields right at the head, etc… bad enough to where I wanted nothing to do with that thing, and admittedly never even did a single sauna session in it. I packaged that sucker up, and completely wrote off that company, as well as any further Amazon purchases after that. (that was the second sauna I bought from Amazon, promising “low emf”)

Fast forward a year later, I begin searching for more sauna companies that are pushing the envelope when it comes to EMF mitigation. I had been fairly satisfied with all my saunas for the most part, aside from a few complaints from a couple 240v customers overseas here and there. I took it seriously though, and began investigating further.

It turns out, when dealing with a 240v transformer, the electric fields do not always behave the same as a 120v model. And they can be higher than what I would like to consider okay.

Low EMF Or Not (what the heck!)

Couple that with my face being plastered all over YouTube talking about low emf saunas, I was aware that there might be some liability there on my part, as well as an ethical obligation to at least look into it if not solve it altogether if I were going to continue talking about saunas.

Up until this point, I didn’t really worry about electric fields much. I was aware of them, but since the WHO reported that there weren’t any studies citing they were in fact detrimental as much as magnetic fields, and most of the people I worked with felt the same, it wasn’t really much of a concern.

However, I’m a user of these saunas first, and a promoter second. I did get one of two reports from people overseas saying they were electro-sensitive, and suffered from EHS. Those people did in fact report that they respond negatively to electric fields, so I continued to look into. (and by look into it I mean, took apart my own sauna, drilled some holes in the walls, ran some cabling, and came up with a way to mitigate the electric fields pretty easily.)

Once I realized there was a solution to the potential problem, I began investigating even more over the next few months to see if there were other ways to make the infrared saunas better. I would do this in my spare time, and didn’t change what I was doing for my own sauna sessions, and carried on as usual.

However, the building biologists that I was working with, typically are alarmed by any type of voltage in and around sleeping environments. Same goes for healing sanctuary’s like saunas too, which began to rub off on me…

Later in the year, I began having people email me and ask about body voltage in saunas. These people were specifically EHS sensitive individuals, something I hadn’t experienced myself, but was still intrigued.

I would work with them over the phone to try and help them implement helpful tips to create an EMF free bedroom sanctuary for themselves, so they could at least sleep well and repair. I used the knowledge I learned from testing the saunas, and applied it to my own house and reported my findings to these guys.

Even though they called wanting help with picking out a sauna, which at the time, I wasn’t really able to help with… they were still moving the ball forward, and I was learning all the time.

If Lower EMF Saunas Existed, Why Wasn’t I Using Them (and promoting them?)

Then toward the end of the year, it dawned on me… Wait a minute, even if electric fields aren’t harmful, or so the current studies say… number 1, I don’t want to find out 20 years from now that they are (like the cell phone stuff from 1999), and number 2, if there are products on the market that test better than what we’re currently using, and are a good fit for EHS people, then why the heck aren’t we using these for ourselves anyway!?!?!

I didn’t have any plans for anything else at the time, but this would later lead to what is now CertifiedSaunas.com.

The Beginning Of Certified Saunas.com

The idea that I would create my own testing procedure, set some basic thresholds for what I thought would be good for EHS sensitive peeps, and simply run a bunch of saunas through it, never came to mind prior to helping out those in other parts of the world over the phone.

Now that I think of it, I should have done that from the very beginning.

Here we are in December 2018 – January 2019, and my search to find more saunas is back…. something I hadn’t done in about 8 months or so. But this time, I was much more informed, people knew who I was (which actually made it harder not easier, much to my dismay), and what I was looking for was very very specific.

I began calling sauna companies once again, just like I did in September – December of 2017.  My last amalgam filling was removed May 2, 2017… and I found myself in the functional medicine doctor’s office on June 3, 2017. She was the one that pushed me to start getting in a sauna immediately, and said I looked incredibly toxic based on all my labs. But it was more than a month later, before I would go to a local health spa and try my very first ever infrared sauna session at a float tank place here in Orlando, FL.  The sauna was a Sunlighten M Pulse, and the experience was an eye opening one.

Fast forward back to today, here I am calling sauna companies once again, on the hunt for a low electric field sauna.

Now this is something that most people at sauna companies don’t even want to deal with. Most sauna salespeople will not even know how to answer, or if they do, will not even want to comment. Most you will never hear back from again, like my experience calling a few companies that I thought may have low body voltage saunas. A few even made things up like, “I’ll have to ask my engineer about that and get back to you…”

They know damn well their saunas don’t have electric fields mitigated in them, and the body voltage will be through the roof. If they were just honest about it with me, I wouldn’t have a problem with it… But like everything else in the sauna industry, deception, deception, deception…. seems to be the M.O.

Okay okay, I just thought I would tell you a bit of backstory, otherwise this Radiant Health Sauna experience would have never even happened at all.

One day I narrowed down my search to a few sauna companies that seemed to care about electric fields, and I thought they might be a good fit for my EHS people going forward. (and every single one of us in the years to come)

I got a call back from Randy Gomm of Radiant Health Saunas, and I could tell right way he wasn’t going to bullshit his way through my questions like most reps I would talk to.  He seemed to care about the end product more than most, so I decided to order one of his saunas.

Now mind you, I had been down this road before. If you haven’t seen all my infrared sauna reviews from the year before, this isn’t something I really WANTED to do all over again. It’s a lot of freaking work, and most of my efforts end up being a complete waste of time, since most saunas that claim to be “low emf” usually aren’t.

Not to mention, people do not realize how much work it is to unbox pallets of saunas, set them up, test them, film the whole thing, edit the videos, answer questions once they’re posted, do comparisons, and on and on and on…. it never ends.

Then you get pissed off when a sauna you have all set up turns out to be junk, and you wasted all that extra time filming it, some having saw dust falling out of the walls ruining your place, etc…. ,etc….   (and people wonder why I’m like F this and F that in some of my sauna videos…)

Anyway, I asked Randy all the right questions, told him I was armed to the gills with EMF equipment, and fired off an order.

The Rub: Realizing “Radiant Saunas” IS NOT “Radiant Health Saunas” (FOR SURE!)

Once received, I immediately realized what a grave mistake I made a year prior, when I got my Radiant Sauna (by Blue Wave) from Amazon. I had completely overlooked, what might just be, the best infrared sauna I’ve ever tested to date. (the Radiant HEALTH Sauna)

What a backasswards way to realize there is some brand Tom Foolery going on out there, and companies are taking advantage of brand marketing from other companies. I shouldn’t be surprised, but you can imagine how I wouldn’t even look at something called “Radiant” AT ALL, after seeing this.

So I won’t jump to any conclusions just yet, and will publish a thorough review of the Radiant Health Sauna once complete. As it stands right now, it might just be the lowest emf far infrared sauna on the planet as far as I can see. (all EMF’s are way WAY under my standards: less than 1mg magnetic fields, less than 12 v/m electric fields, ZERO RF Radiation, no Bluetooth, no WiFi, and body voltage less than 30 millivolts throughout.)

Let’s just say, the meters don’t lie, and I have a lot of them. For now, I just want to make sure there is some clarification out there between a sauna you should never buy, and quite possibly one of the best saunas on the market that I want to use myself going forward…

9 thoughts on “Radiant Sauna IS NOT The Same As Radiant Health Saunas!”