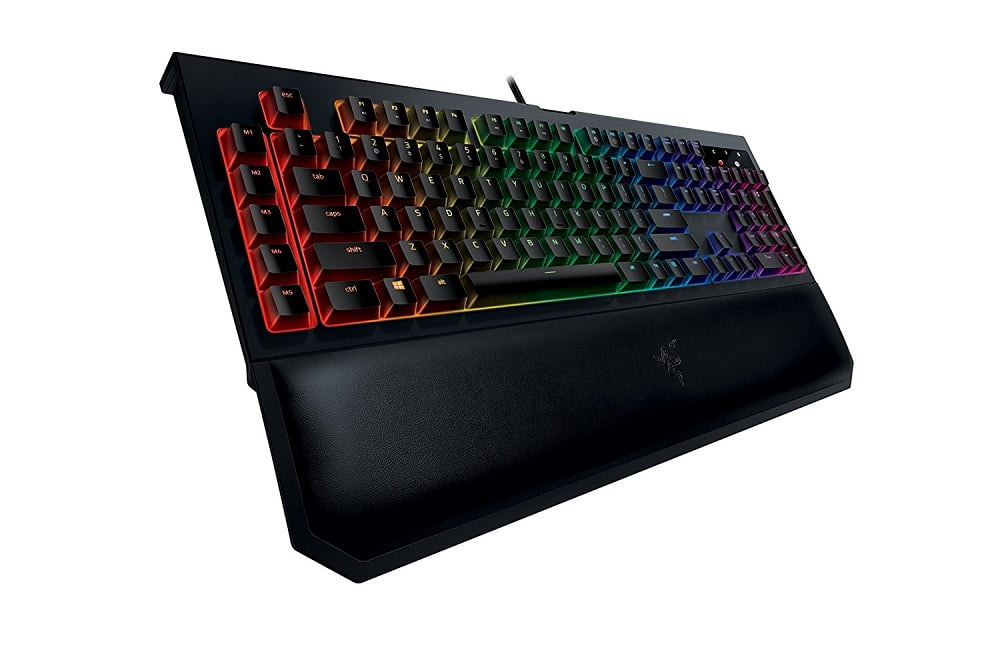 When choosing your gaming keyboard you need a company you can trust. You can’t afford to spend a couple of hundred bucks on something that isn’t durable, and that isn’t going to last. When you are in an intense session of gaming you are going to want a keyboard that can withstand the hours of constant keystrokes and abuse. For those of you who game competitively, you know that the best keyboards to do the job are mechanical keyboards, and Razer is the best in the business. You know you have a quality product when you buy it from Razor, and today we are going to list some of the best keyboards available for your gaming needs.

Priced at just under $100 dollars, the Razer Ornata Chroma is the perfect mechanical keyboard for a gamer on a budget. Since most new razer products are generally priced around the two hundred dollar mark you will be saving yourself a ton of money without sacrificing quality from purchasing this product right off of Amazon. What I like about this keyboard is that it is entirely back lit that can be fully customized within the RGB scheme. This keyboard makes gaming especially fun at night when you see all the beautiful colors light up, and the colors are very bright. Another great feature that the Ornata Chroma brings with it is an arm rest that lays directly below the keys itself which helps out quite a bit if you play games, or are on the computer in general for several hours at a time. Nobody likes a sore wrist, and some might say that it comes with the territory, but it doesn’t have to if you purchase the Razer Ornata Chroma. This mechanical keyboard also comes with an anti-ghosting feature, and a custom designed cap for each individual key so that keystrokes take much less time to register. You can own your enemies with your quickness with this keyboard, and I haven’t heard of a keyboard yet that has implemented technology like this. Outstanding job by Razer on this one if I could say so myself. Razer has also implemented new technology within the bottom part of the keys that will also keep it from making loud noises every time you press a key which we all know that if someone is trying to sleep next to you while you are using a mechanical keyboard, then it is usually quite difficult to go to sleep. However, with this new rubber dome technology that they place on the keys themselves, they are unusually quiet.

The next keyboard we will be critiquing is the Razer BlackWidow Ultimate Elite that was released way back in 2014. Just because it is three years old doesn’t mean it can’t compete with the best of Razer’s lineup. I personally own this keyboard, and it has been running strong ever since it was released. I love the green hue that comes from the backlit keys; however, unlike the Ornata Chroma, this model doesn’t have a wrist wrest, and it has no rubber dome technology which makes it extremely loud. In fact, that is exactly what I am typing to you on at this very moment. I use it for all of my professional needs as well as my gaming needs. Since it is three years old now you can go get yourself one of these from Amazon as well that is even cheaper than buying the Ornata Chroma. If you pick this over the previous model we discussed you will only have to pay about seventy U.S. dollars for it, and that is beyond a steal. Even most crappy keyboards you can buy at Walmart are around thirty or forty bucks, so do yourself a favor and grab a Razer. This keyboard also features anti-ghosting which allows keystrokes to register much faster than a regular keyboard would, and that is absolutely essential when you are gaming. Imagine dying to a noob in a game of Call of Duty: Advanced Warfare all because your computer didn’t register the keystrokes you were making fast enough. I know that is something I experienced before I went out and bought myself this Razer model; however, I think it will soon be time for me to tryout the Razer Ornata Chroma. What do you guys think about having a little compare and contrast competition between these two keyboards? I think a nice pros and cons battle would be ideal in this situation, and I think we are going to do this for other models listed in this article as well, just for good measure.

So, as of right now our leading contender will be the Ornata Chroma, and I am sorry to the BlackWidow Ultimate, but you are just old news and you can’t compete with the newbies on this playing ground.

Razer DeathStalker Essential: DO NOT BUY!


If you still want a Razer product, but are on a really tight budget, then you could always purchase the Razer DeathStalker keyboard for under $50 dollars. However, I want to warn you that I don’t personally recommend this keyboard for gaming, because it is not a mechanical keyboard. Also, the keys on the keyboard itself are virtually flat, and I did buy one of these last year and quickly returned it due to me accidentally hitting several of the wrong keys while playing League of Legends. Basically, I got owned several times in games, because I would use the wrong abilities while trying to navigate the keyboard, or I just couldn’t find the keys with my fingers properly without looking due to them being flat.

On the upside of things this keyboard does host anti-ghosting technology like its predecessors; however, what good will that do you if you hit the wrong keys in the first place? If you want to get stomped in your favorite games over and over, then by all means go out and purchase this pile of crap; but, I suggest you take the time to save up some money for a real game changer like the Ornata if you are serious about gaming. There is no need giving your competitors easy frags based on the terrible engineering of a product you bought, right? Please, if you see this thing in stores, or on Amazon, run as fast as you can and never look back. Instead of naming it the DeathStalker, Razer should of named this keyboard the “LOSERBOARD”. In case there is any doubt in your mind, I mean what I said about this model with every ounce of my being. Just because it has the name Razer on it, doesn’t mean it is a good product. This is one of those instances that we told everyone to thoroughly research your products before you buy them, and even I make a mistake from time to time, and buy on impulse. I told you what buying this product has done for me, and I don’t want any of you falling into the same trap I did just because it was cheap.

Now let’s talk about one of Razer’s big players, the BlackWidow Chroma V2. This keyboard is a fully functional mechanical keyboard that has the exact same lighting features as the Ornata, and it has the awesome wrist rest to boot. However, you will find out when you purchase this keyboard you will be spending twice as much on it as you would with the Ornata. Right now it is priced at a solid one hundred and sixty nine dollars directly from Amazon.

However, this keyboard does have a lifetime of eighty million keystrokes, and will last you a very long time before it malfunctions. Furthermore, this model doesn’t come with the rubber dome technology so it still will be extremely loud which we have already discussed, and that could present a problem for you and others around you if they are trying to get any shut eye at night. Sometimes when I use my Razer keyboard my wife yells and me at night and tells me to switch it out, because it is so damn loud. However, the price is a little high seeing how you can get a model that is just as nice, but let’s compare this one to the DeathStalker to see who makes it to the final showdown.

So, we know that the Deathstalker is an overall hunk of junk with no real value to the gaming world. It is not a mechanical keyboard, and the overall design just sucks bullets. Compared to the BlackWidow Chroma V2, it loses over and over again. The Chroma V2 offers so much more in terms of functionality, reliability, and versatility. For this battle it is an easy win, and you don’t have to be an expert to determine that. I will stay with my former stance, and tell all of you reading this, don’t buy a Razer DeathStalker, period.

Now all we have left are two competitors. This decision will still be very one sided, and mainly because one product is higher priced than the other, and one of these keyboards doesn’t have the rubber dome technology to soften the noise brought by the keystrokes. Everyone is probably knowing where I am going here so I will just come out and say it. The Razer Ornata is my overall first pick due to the fact that it costs under $100 dollars, whereas the Chroma V2 costs over $150 dollars. They both have the same amazing custom red, blue, green lighting features, and both keyboards feature a luxury wrist rest. If two products offer the very same thing, and bring with them the very same quality, then which one would you choose? The option is clear here, and you would most likely choose the cheaper model, or at least I hope you would. It doesn’t seem logical to buy a product from the very same company who makes the competing product, but with a higher price tag.