Are you looking to set up your blog and wondering if Squarespace or Bluehost would be better for blogging? Below I’ll walk you through some of the pros and cons to each, and even cover ecommerce if that’s what your long term intention is. We’ll go over price, features, and ease of use, and by the end of this article, you’ll be able to decide which service is better for you.

Keep in mind I use self hosted WordPress here on CleverLeverage.com, and I have experience with a ton of different platforms.

Update Summary: Which Is Better Bluehost or Squarespace?

In this section, we’ll discuss the main difference between Squarespace and Bluehost, and how the platforms differ in terms of setting up your blog. The main thing to keep in mind when comparing Bluehost to Squarepsace, is that Squarespace is meant to be a drag and drop website builder/domain and blog hosting service all in one. While it might make it easier in the beginning, later on down the road there might be limitations running a setup like that.

Bluehost on the other hand, is mainly a web hosting provider even though they offer tons of one click install free CMS softwares to run your website on, like WordPress that we’ll be talking about below.

How Much Does Squarespace Cost?

Squarespace plans and pricing start at $12 a month if you pay for the annual plan up front. Month to month pricing is $16 however, which seems a little steep to me for what you get. As a general rule, the average cost to host a blog is around $10 dollars per month for a beginner, including your domain name registration costs.

How Much Does Bluehost Cost? 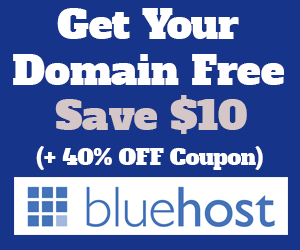 Bluehost costs $3.95 per month for their annual plan, and $5.99 to $7.99 (what I pay for my BH account) for their month to month plans. If you sign up for 12 months or more of hosting with them, you get your domain name registration for free. The 40% off coupon code page is here if you want a bit of a discount. With Bluehost however, you’re free to install whatever you want on your hosting account, and there are no limitations like with Squarespace.

SEO For Squarespace VS Self Hosted WordPress

In my opinion, SEO optimization (especially content and on site) is much easier with WordPress. I’m not sure if it’s because I’m more familiar with the interface, or maybe because of the tons of free SEO plugins for WordPress out there, but optimizing each post seems much more straightforward in the WordPress dashboard than in the Squarespace editor.

Which Blogging Platform Is The Easiest To Use?

The Squarespace website builder is easy to use for drag and drop website building, but I find it too clunky for everyday blogging. After using WordPress for a while, it just feels unorthodox to use the page creator and blog post manager within Squarespace, and I feel like it’s an altered reality compared to the text editor built in to WordPress. That’s not to say it doesn’t work well at all, it’s very sleek and minimalistic, and I can see why a large crowd of photographers and such love the platform. I just think people learn and catch on really quickly, and unless their long term goal for their blog or website is clearly defined in the beginning, they might find themselves in a limiting situation with some of the Squarespace features.

Personally I like the flexibility of a little more control, that way if I want to add something custom later on once I have the basics down, I can easily do it without any limitations. WordPress is a much better fit for that, and a Bluehost hosting account gives you all the flexibility you need to upload and customize whatever you want.

The Squarespace Editor Compared To The WordPress Editor Below 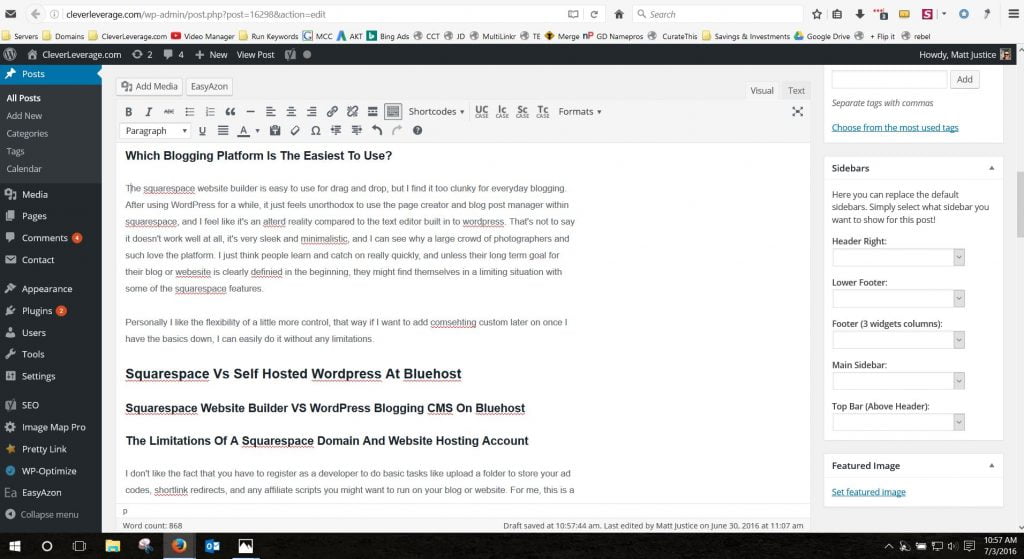 Squarespace Vs Bluehost (self hosted WordPress)

In this section, we’ll talk about the main differences between hosting your domain’s content management system on a blog hosting account at Bluehost, compared to the all in one domain and web hosting solution Squarespace provides. Both are good, it’s just a matter of what you prefer. Personally I prefer self hosted WordPress on my own web hosting account, that way I can do whatever I want, whenever I want without limitations like we’ll discuss below.

I don’t like the fact that you have to register as a developer to do basic tasks like upload a folder to store your ad codes, short-link redirects, and any affiliate scripts you might want to run on your blog or website. For me, this is a deal breaker right off the bat, and half the stuff I do around here at Clever Leverage.com wouldn’t work if I didn’t have access to customize things.

That said, this is probably a very good limitation to have in place for complete newbies who have no file editing experience at all. Without step by step tutorials like I put together here, you could easily blow something up without even realize it… creating a very frustrating experience for both you and the customer support team at Squarespace.

Is Squarespace Good For Ecommerce Stores?

I like how Squarespace integrates their merchant processing for ecommerce stores, and they do a good job of giving you a complete platform to publish your website, add products, and accept payments. There’s just one caveat when it comes to comparing this all in one platform to other ecommerce website solutions… I think there’s a company that does it better if you’re strictly going for starting a blog with an ecommerce store piggybacked on top of it, and that service is Shopify.

Shopify Vs Squarespace VS Bluehost Self Hosted WordPress WooCommerce

So this might get a little complicated, but in a nutshell the best ecommerce platform out of the three strictly for ecommerce selling, is Shopify hands down. The amount of third party integration they have built in, and the fact that much like Apple’s slogan of “it just works”, Shopify is one of the best platforms for ecommerce websites on the market today. (If not THE best!)

Comparing Shopify to Squarespace is kind of like comparing an F-150 pickup truck to a Semi. One can tow, haul stuff well, and is great for a wide variety of things, but the other (semi) is specifically designed for hauling heavy loads and pulling things long distances. Bad analogy I know, but that’s the different between Shopify and Squarespace and here’s why: Squarespace is setup to appeal to a wider variety of website publishers, and Shopify does one thing and one thing very well – Ecommerce. They constantly refine and introduce new features to the platform that make selling online that much easier.

Now don’t get me wrong, I’m a huge fan of WordPress for blogging and I think it’s the best blogging platform on the planet. But, even using the free self hosted Woocommerce addon for WordPress to run your ecommerce store, isn’t as good as Shopify for selling online. They simply have the most refinements of any ecommerce platform on the market today. Volusion and Big Commerce used to be in the game as well, but Shopify is out pacing them all if you ask me!

So which is the best out of the three if you want to get your feet wet blogging and starting an ecommerce store?

If money is tight, and you’re on a budget, go with Bluehost and Woocommerce until you’re making consistent sales. Once you’ve outgrown that platform, it’s easy enough to switch to Shopify down the road. If your budget allows $20 – $50/mo, start with Shopify right out of the gate, because they have an addon section that integrates your blog right into the store.

Conclusion: SquareSpace Or Bluehost – Which To Go With

If your primary intention is to setup a blog, Bluehost will give you more flexibility if you go with a self hosted WordPress install instead of Squarespace‘ drag and drop website builder. A lot of people like Squarespace for ecommerce, but I would just make the jump to Shopify if you want to build and ecommerce store… They’re the best in the business and all the third party apps and social media automatically integrates with your store, with no technical knowledge on your part.

Coupon codes: (should still be valid, if not search the blog for newer ones)

3 thoughts on “Squarespace VS Bluehost: Which Is Better For Blogging?”