I write for a living. Furthermore, I’m an old soul and I do the majority of my writing the old fashioned way–longhand with a pen and notebook. Eventually I transcribe what I write by hand, but starting out my process always begins with dirtying up a blank sheet of paper with a writing tool of some sort.

With that said, I consider myself a connoisseur of ink pens and papers, and believe me, I’ve used a lot. As a former military member and survivalist/prepper, I also believe in carrying a supply of tactical equipment on my person every day. I love equipment that is dual-purpose and/or multi-functional.

I have yet to see Batman write a check or sign a document while thwarting the plots of Gotham’s criminals, but if he eventually does, he’ll undoubtedly use a tactical pen of some sort. Tactical pens look badass and in most cases they write like a badass, too. They’re usually built like a tank and can serve as a last ditch self-defense tool in a pinch. They come in a variety of price ranges, from damn near disposable to damn near a car payment. Oh, and if you’re more of the James Bond type as opposed to Batman, don’t worry–we’ve got plenty of “normal” looking options for you to consider too.

If you’ve never looked at adding a tactical pen to your everyday carry arsenal of tactical items, what follows is a list of 10 of the best options to look for in 2017. 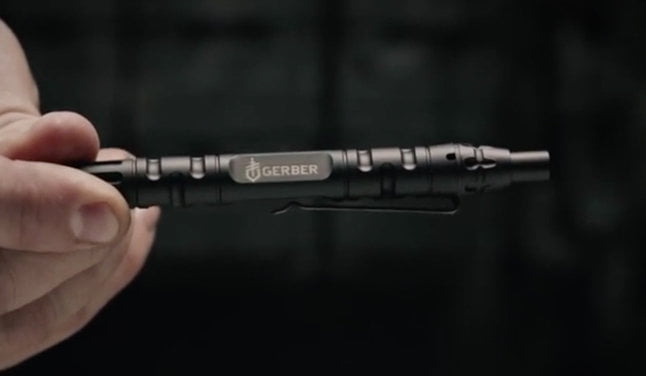 Gerber has been a player in the knife and tool business for a while now, and it’s pretty clear that they employ the same high standards when building their line of tactical ink pens as well. The Gerber Impromptu was tested in the field by law enforcement professionals, and it’s one of the most widely used tactical pens among those that work in dangerous environments. This particular model from Gerber includes a window punch, should you find yourself needing to get in or out of a vehicle in a hurry. The glass punch can also be used as a blunt weapon, and when combined with the Gerber Impromptu’s tank-like construction it makes for a very solid self-defense tool. The Gerber Impromptu can normally be found for less than $40.

The Israeli firearm manufacturer Uzi has produced some of the most recognizable sub-machine guns in the last sixty years. Eventually the company branched out and began manufacturing all sorts of everyday carry tactical items, from knives to flashlights and now, tactically pens. The Uzi Defender is rock solid and at less than $25 it represents one of the most “bang for your buck” pens on this list. The Defender has been tested by Special Forces operators and the Secret Service, so you can bet it’s a reliable addition to your kit. The Uzi Defender is made from aircraft aluminum, making it a lightweight self-defense tool, and it also includes an integrated glass breaker and hidden handcuff key.

Remember that scenario I mentioned earlier about Batman signing documents while in the field? I think there’s a pretty solid chance he’d use this pen to do it. The Schrade Survival Tactical Pen is another value buy, as it can usually be found for less than $30, but the pen includes a ton of survival features. It’s constructed from sturdy, but lightweight aluminum, making it a viable self-defense item. The Survival Pen also includes a built-in glass breaker and whistle. Add to that an integrated fire starter and it’s no wonder the Schrade Survival Tactical Pen is the preferred carry choice for a large number of outdoor survivalists.

The 5.11 Double Duty is a mean looking pen. I do most of my actual work related writing with an old school fountain pen, and that’s what this thing looks like. While it doesn’t contain any integrated tools, the sharp writing point and aerospace grade aluminum construction still make this pen a good option for self-defense. While this is a fairly bare bones tactical pen, the lack of bells and whistles (literally) could be just wat you’re looking for if you want a pen that doesn’t scream “tactical.” At more than $70 (normally) it’s a little higher priced than the previous models we’ve discussed, but again, part of what you’re paying for is a very sleek and very functional writing instrument.

The Benchmade 1100 Titanium Series Pen is the most expensive model on this list. At more than $200, for most folks it’s not a purchase that would be made lightly. However, if you find yourself in need of a sleek looking, professional pen that could also be used to fend off would be assailants, this might be the right pen for you. The 1100 is constructed from Titanium, making it virtually indestructible, and comes in a light blue color, so once again, it doesn’t scream “hey, I have a tactical pen!” It utilizes a Fisher Space Pen cartridge, so should you find yourself closing a major business deal while hanging upside down, in zero gravity or on one of Saturn’s moons, you’re covered. 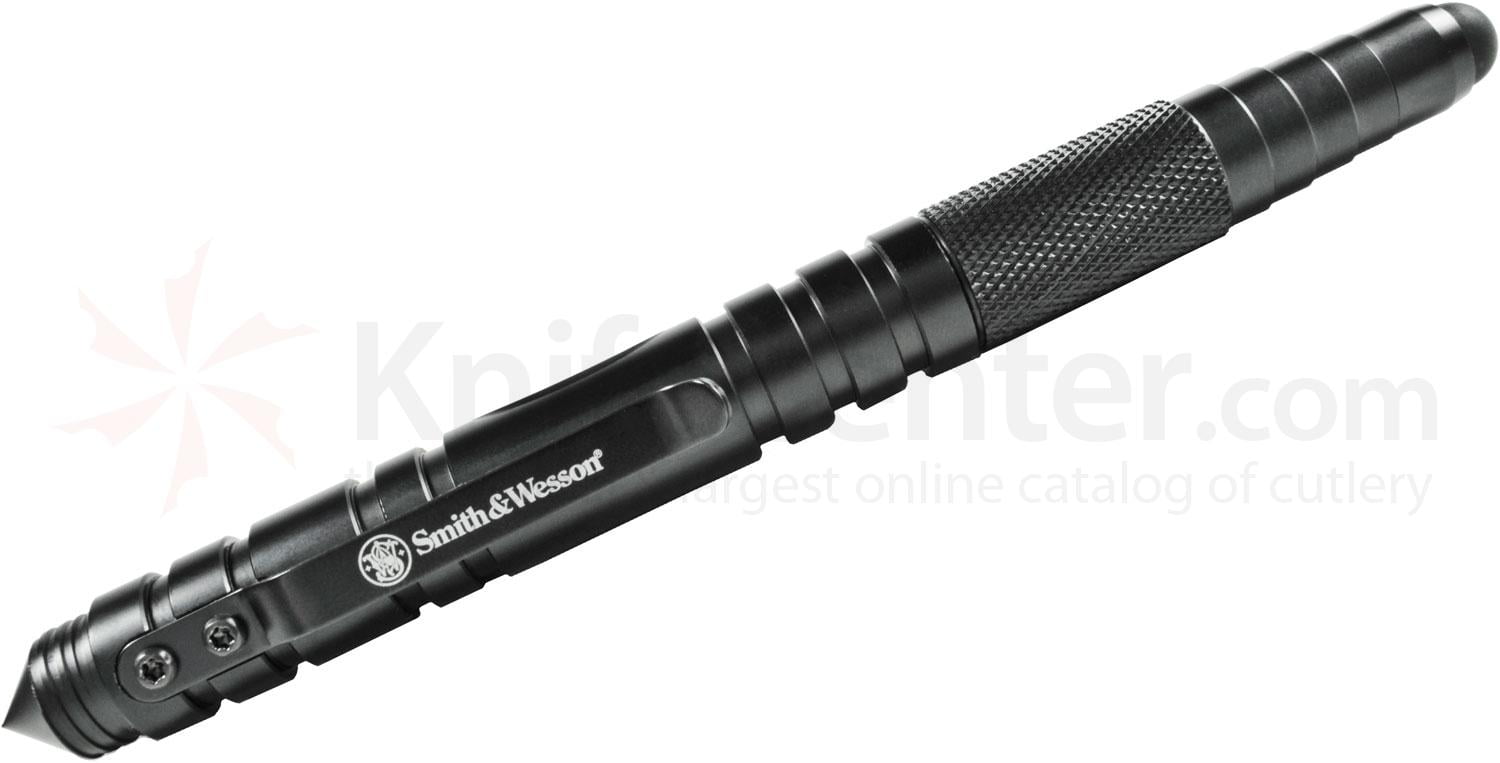 This one is a perfect option for the more technically savvy survivalist. The Smith & Wesson Tactical Pen with stylus is a favorite for those folks that work with tablets in tactical environments. The built in stylus is protected by a screw on cap which, like the rest of the pen, is constructed from machined 6061 aluminum. A personal protection tip and ballpoint ink cartridge rounds out the features on this pen, and for less than $30 it makes for a very valuable piece of kit.

I’m a big fan of Boker tactical knives and I think they represent an incredible value for the money. The Boker Plus Tactical Pen follows suit by offering a really well made and functional tool for less than $25. The pen is constructed from lightweight aluminum, and has a checkered texture for a secure grip. There is a stainless steel insert in the shaft of the pen, making it a viable self-defense option. 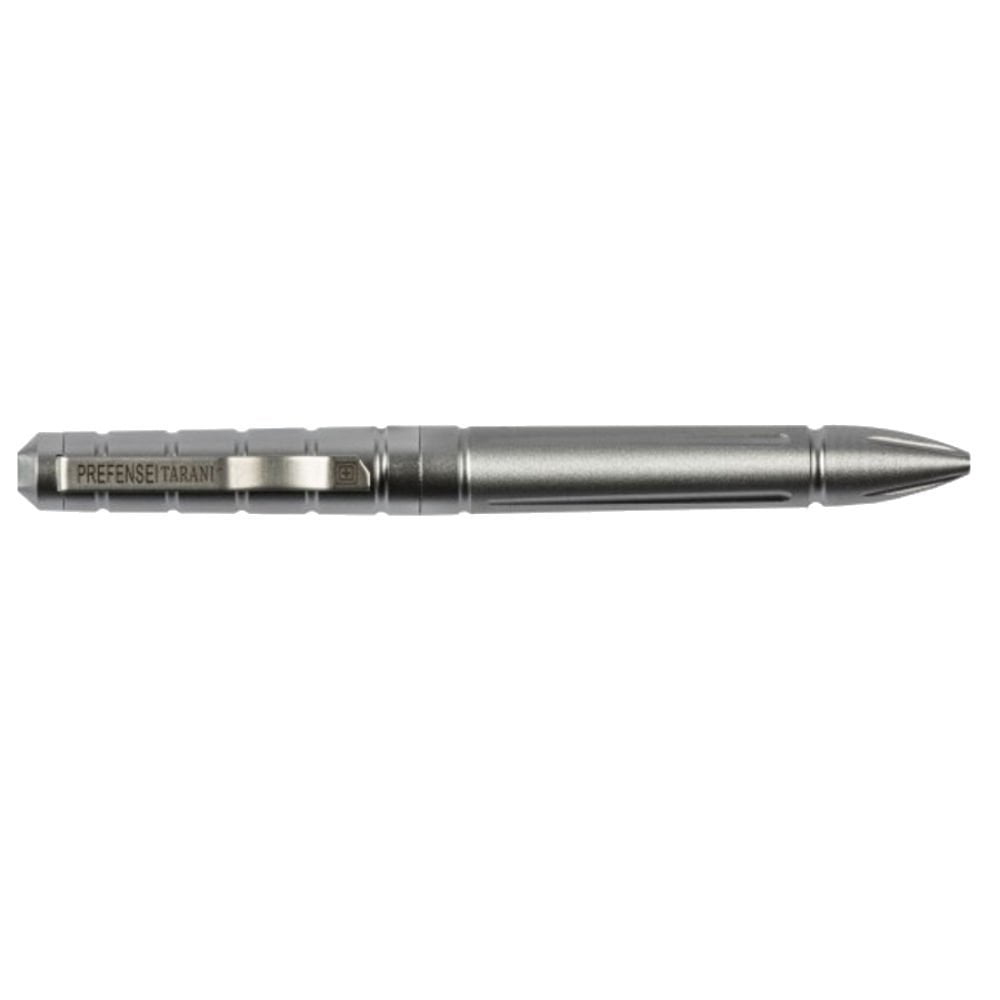 Even if you never plan to use an ink pen in any tactical capacity, believe me when I tell you that this is one sexy writing instrument. Constructed from anodized aluminum, the PreFense Lance is another option for those wanting to carry a good looking pen without looking like it’s the little brother of the compact pistol that’s probably secured under your shirt. While it may not look tactical, the PreFense Lance’s construction and flat top make it an excellent option for self-defense applications. At the very least, you’re getting a very attractive pen for less than $60. 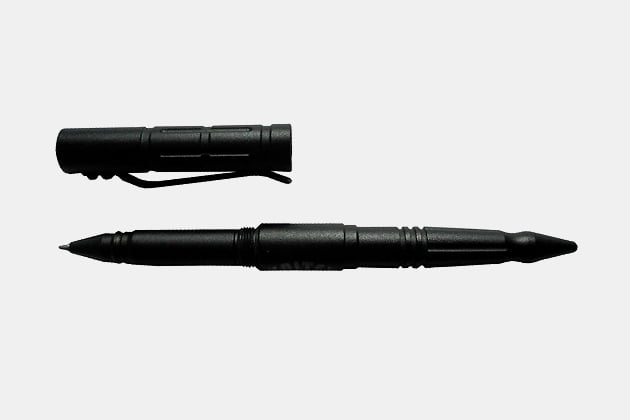 Here’s an option that is so wallet friendly you might want to consider buying several, just so you have some on hand as backups. At less than $20, the Valtev is the most affordable option on this list, but don’t let the price fool you, the rugged aircraft aluminum construction makes this a lightweight, yet still very capable self-defense tool. The Valtev is compatible with both Fisher and Parker ink cartridges.

Built like a tank without looking like one, the Zero Tolerance 0010TI Titanium Tactical pen is another fantastic pen, not only for those looking for tactical applications, but simply for those looking for an extremely professional and attractive writing instrument. The machined titanium construction and integrated glass breaker make it a practical self-defense and survival tool, and the Rite in the Rain ink cartridge gives the user the ability to write in any position, in any condition. All that sexiness and functionality comes at a slightly higher price, though, and you can expect to pay at least $150 for the Zero Tolerance 0010TI.

Is the pen truly mightier than the sword? It’s hard to say, but one thing is for sure: whether you need to fend off a would be attacker or slay a particularly difficult block of Sudoku, the pens we’ve discussed here will get the job done, and keep you looking classy as hell in the process.