Do you ever find your mind plagued with unwarranted and distressing thoughts and you’re not sure how you began thinking about them? Or do you sometimes feel so affected by a stressful event that it develops into fear you can’t shake off? Chances are, you may be going through anxiety and not realizing it. Anxiety is the natural response of the body to a stressful stimulus or event. It is the butterflies and the panic you feel in your stomach before an exam, speech or an interview. Some amounts of anxiety is even healthy, as it shows you care about a certain outcome. But, if the feeling persists for a prolonged period of time and you begin catastrophizing or thinking of the worst case scenario of an event, even when there is no need to, chances are you are suffering from an anxiety disorder, which needs to be treated professionally.

The American Psychiatry Association says that anxiety is characterized by muscle tension and avoidance behavior while anticipating a future concern. According to the APA, nearly 30% of US adults face an anxiety disorder at some point in their lives. A person is diagnosed with an anxiety disorder when the fear and nervousness hinders their ability to function normally.

Anxiety disorders manifest as panic disorders, phobias which are the excessive fear of a particular object or situation, social anxiety which is the extreme fear of being judged in social environments, illness anxiety disorder which is the fear of health concerns and post-traumatic stress disorder, which is the anxiety that sets in after a traumatic event. It has also been found that women are more likely to suffer from stress, due to their genetic makeup and how they interact with the environment, as compared to men. There are various ways to help treat anxiety through either therapy, medication or even coping stressful situations by oneself.

In almost every culture, dance is synonymous with happiness and celebration and the practice goes back thousands of years. It has also been used as a healing ritual by many tribes and communities. Dancing releases endorphins which promote the feeling of euphoria, satisfaction and increase the body’s tolerance towards pain. Research has also shown that dancing is linked to significantly helping lower the anxiety a person feels. Be it a high-intensity or low-impact form of dancing, it is a cost effective and fun way of reducing anxiety, while also getting in shape.

Dance movement therapy (DMT) is a kind of inventive, body-oriented psychotherapy, which uses movements, dance, and verbal cues to help an individual integrate emotionally, cognitively, physically and socially with their environment. It has been found that 150 minutes of movement a week or about two-and-half hours of physical activity is ideal for helping maintain physical and physiological health.

Lavender is a flower which not only smells nice but is also known for its calming effect on the mind and body. Most frequently found in the form of essential oils and in incense sticks, lavender is known to be anxiolytic or known for helping reduce anxiety. While earlier its properties were only anecdotal, they have now been proven by clinical research and trials. Lavender essential oil is purported to be antifungal, an antidepressant which also helps muscles relax and also helps wounds heal. Lavender essential oil extracts have found to have a calming effect on the body, without having the effect of a sedative in the case of a generalised anxiety disorder. 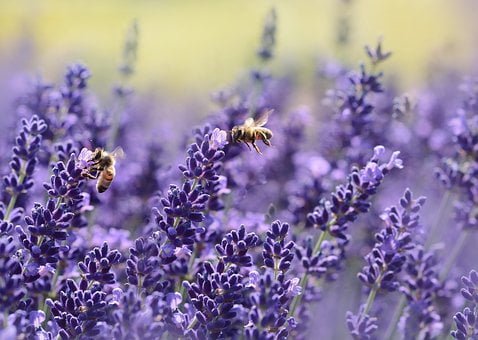 Most commonly, lavender is recommended to be administered orally and the Food and Drug Administration has also granted a Generally Recognised as Safe status to lavender essential oil, making it safe as a food additive. Lavender essential oil can be used in aromatherapy, while bathing or can be directly applied to the skin without diluting it. In its essential oil form, lavender produces a calming effect on the body without showing tendencies of dependence or withdrawal by those who took it to reduce their anxiety.

Diet plays an important role in maintaining a healthy lifestyle and several foods have the nutrients and antioxidants required to help reduce anxiety. Salmon is rich in Omega-3 polyunsaturated fatty acids like eicosapentaenoic acid (EPA) and docosahexaenoic acid (DHA), which have neuroprotective properties that help protect the brain against neurological disorders. EPA and DHA are found to help in the regulation of serotonin and dopamine, which regulate mood and happiness in the body. EPA and DHA help the brain adapt better to changes, allowing for the body to be better equipped in handling stressors which trigger anxiety.

For those who do not eat meat, drinking chamomile tea can offer similar benefits for reducing anxiety. Chamomile contains terpenoids and flavonoids, which contain medicinal properties that have rendered the plant among the oldest medicinal plants known to man. Chamomile is among the most popular herbal teas and consuming it over the span of eight weeks has shown to significantly reduce generalized anxiety disorder.

Soak in a Hot Bath

The first suggestion given to anyone feeling anxious or stressed is to have a hot bath and for good measure because it has been scientifically proven to help both the emotional and physical aspects of the quality of life. Fatigue, stress, pain as well as emotional health and general health seem to improve after taking a hot bath. However, it is the immersion in hot water and not showering with hot water that exerts hyperthermic action which helps increase the blood flow that helps in feeling refreshed. The hyperthermic action warms the blood vessels which helps in increasing the deep body temperature. As the body warms, the metabolism is stimulated and the body feels more refreshed. Buoyancy reduces the downward force of gravity which is also linked with the reduction of anxiety and stress relief.

Playing with Your Pets (Or Any Animals)

Interacting with your pets or any animals is associated with helping people cope with anxiety and stress. Dogs especially are known to make a positive impact on the mental health and wellbeing of humans, by reducing stress, anxiety and feelings of loneliness. Animal or pet therapy is especially used for elderly care and for those dealing with post-traumatic stress disorders (PTSD).

Presence of dogs around people experiencing anxiety is found to have lowered blood pressure and reduced the amount of cortisol being produced in the body, leading to a reduction in stress and feelings of agitation. Petting animals, be it soft and cuddly animals like dogs and cats or hard-shelled animals like turtles, both have been found to reduce stress and anxiety in people. The positive effect of animal therapy is also found in people who do not classify themselves as animal lovers.

Sexual activity has found to reduce anxiety in both men and women. Having sex releases the feel-good hormones in the body like oxytocin and endorphins, which are the natural pain killers in the body. These help in lowering the stress and anxiety levels. It also helps boost self-esteem and mood, which also in turn lower feelings of anxiety a person experiences. Regular sexual activity also helps the growth and development of cells in the hippocampus which is where hormones for stress and anxiety reduction are produced. It also helps in reducing blood pressure, which also helps reducing the heightened feeling of anxiety.

Binaural beats are subtle beats that are incorporated into soothing music which when heard for a period of time help reduce the feeling of anxiety. The word binaural means relating to both ears. In binaural beats, the sound entering through each ear are at slightly different frequencies from one another so when they enter the brain, a new frequency beat is produced. Listening to binaural tapes over the span of a month has shown to reduce mild anxiety while also improving the mood and performance in tasks. Binaural tapes can be used as a cure for anxiety in addition to therapy.

Anxiety is a condition that afflicts at least one in ten adults in the US at least once in their life. While feeling anxious before an important event or task is normal, when it begins hampering a person’s daily life, external intervention is required. Therapy and behavioral adjustment are the most common ways to control anxiety. However, there are certain foods and beverages like chamomile tea and chocolate which help in reducing anxiety. Interacting with animals is another way of reducing anxiety and increasing happiness levels. Getting physical activity in the form of dancing or sex also lowers stress by releasing endorphins in the body. A hot bath helps keep both physical and mental health in check. Try incorporating these elements in your schedule for a more stress-free life!